Think about all those people who are playing on their 3DS or PS2 connected to old CRT TV at the moment. They have a lot of fun playing with their beloved toys and nothing distracts them from an easy going electronic entertainment. There are surely lots of them while I’m sitting here with a rueful mien along my custom-made gaming PC with hi-end six-core CPU and couple of top gaming video cards carrying 6Gb of overclocked GDDR5 memory. I spent last hour and a half trying to run another game flawlessly at its fullest but still was unable to activate SSAA. It came with no surprise there is no such option in the game. I modified existing driver  preset for game many times trying lots of combinations but got nothing. I attached the game executable file to older tested presets and again nothing good happened. I’ve opened nvidia inspector (because nvidia control panel is completely useless)  more times than I will open the game itself. At this point I’m really tired of the fact that I have to solve mindblowing puzzle every time I start new game  if I want to see absolutely everything it has to offer. With last game I spend more time searching for solution in Internet and configuring options than it took me to beat the game itself.

At the time I’m typing this words some restless feeling of hatred raises from the depths of my mind. Powered by constant frustrations this feeling grows but it can not find its direction. Who should I hate for that? Game developers who never care about demands of the advanced users? Hardware manufacturers who prefer to sell 1000 video cards from lo-mid segment rather than 50 hi-end models, and treat drivers customization accordingly? Huge gaming portals that believe it’s appropriate to post such screenshots? Masses of casual gamers who don’t know what hardware is inside their computers and mix up anti-aliasing with anisotropic filtering? Or maybe I should hate myself for knowing and seeing too much? 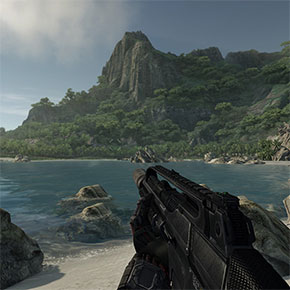