Masyana is a character with long and complicated history. It started in early 2000s as a joke showing the possibilities of Flash technology on the homepage of Oleg Kuvaev. He is an artist from St.Petersburg who previously worked in Animation Magic which developed Zelda games for CD-i console, NASCAR Racing and unreleased Warcraft Adventures: Lord of the Clans. Animations with Masyanya at that time were very short and silly but soon became popular in russian segment of Internet as they presented not only new technology making web 1.0 more interactive, it was possible the first appearance of something connected with young and informal russian internet-community. Though Masyanya kept her simplistic and deliberately distorted nature all the way the quality of drawing improved much for couple of years. Animations became longer showing humorous story with exaggerated characters taken from real life instead of lonely gags of first ones. Masyanya, Hryundel, Lokhmaty became the collective images of advanced youth of their time and were understood and accepted by most of Internet users. Moreover they looked even more realistic because of “spontaneous speech” principle. Oleg Kuvaev who made all the voice acting also, didn’t just read the lines. He brought the idea speaking it by his own words “on the fly” like we speak it in real life. With all this things popularity of Masyana grew much and finally reached it highest peak. In 2002 Masyanya became the part of Leonid Parfenov’s TV show. New series came out weekly and were presented on russian federal TV channel for almost the whole season. Regretfully due to the financial problems contract was discontinued in 2003. Not much time later show itself was closed because of the political conflict inside the NTV company.

Though TV business just could not let Masyana go and some time later that year she appeared on TV again. Without the consent of the rightful owner one cheap local analog of MTV started “Visiting Masyana” show with russian pop-musicians. It was not only copyright violation but distorted the whole idea of nonconformist and anarchist character Masyanya infact was (you may see it in “Russian punk rock”  and “Show business” episodes). Сourt proceedings took years but after all Oleg Kuvaev defended his rights officially. This case became first public precedent of copyright lawsuit in Russia.  During this time there were very few new episodes (some of them were pretty angry about the pop-music) also because of side-projects by mult.ru – “Bo’s shop”, “Six and a half” and “Ezhi & Petruchio” series. However Masyanya was destined to have another youth (also known as “Third Life”). The quality of drawing raised up to another level. Soundtracks were created by friendly professional musicians. That period starts commercial animations with Masyanya as well. Some of them were not that bad as you may think commercials are. For example, “Archives of the Russian Internet” in 9 episodes sponsored by ZyXEL is rather interesting and historically true most of the time while ZyXEL really had great impact on IT in Russia. The point from where it all went downhill is 2006 when Oleg Kuvaev left mult.ru studio. He kept rights to Masyanya and even mult.ru domain though had no financial freedom to produce new episodes so they came out more and more rare. Low budget forced to find another ways to express the creative idea. That’s why there were short episodes, episodes with no speech at all, episodes combined from old episodes, comic strips… In the last one Oleg Kuvaev tried to gain interest from wider audience by making Masyanya pregnant (not literally of course)) but that action had opposite effect. By now almost two years passed since that without new episodes.

Thankfully, Masyanya found new niche – casual flash games. At the moment there are four of them. “Masyanya under the yellow press”, “Masyanya in a complete Africa” and “Masyanya. Eurotrip” have similar gameplay, something like downgraded (to be simple enough for anyone) traditional russian quest mixed with “hidden object” concept and arcade mini-games. Other one, “Masyanya and the beach stuff”, is a decent clone of “Farm Frenzy” series with few jokes and mere plot. I don’t know if she will become the competitor to Nancy Drew but I hope Masyanya will live long for those who still remember her triumph no matter the form. Not so long ago I found nice cookies with her mischievous face on. That’s actually the cause I wrote this post. I doubt that small local bakery paid something to the author as it was in many small cases when Masyanya suddenly appeared here and there (she took part even in campaign by russian road police once while Oleg Kuvaev was unaware about) but it’s good to know that such a colorful character is not forgotten yet.

P.S. Sorry if I occasionally translated some titles wrong, it’s not easy for something that was never widely known outside of Russia.

Current music: System of a Down - Atwa 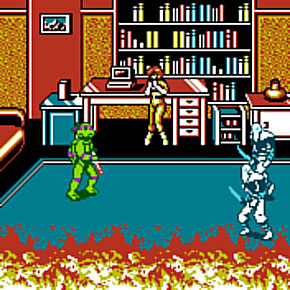