Yesterday I had some free time and decided to make use of good weather in one of these last days of summer. So I walked a bit through the older (though not the oldest) central part of Togliatti and took some photos.

Let’s begin with the big construction of a mall that stands out of the typical old soviet architecture. 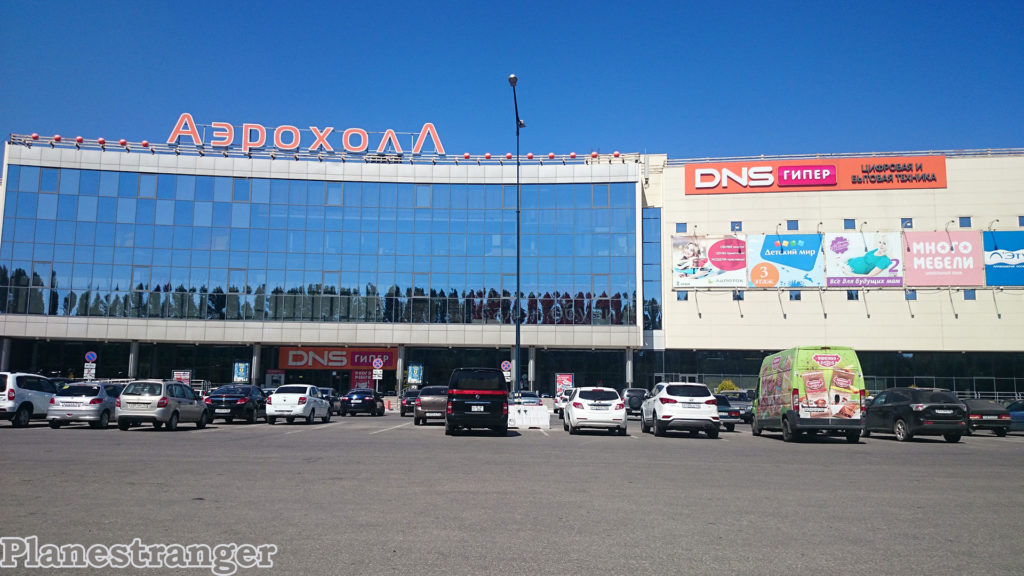 Fast food stall and small beer bar squeezed between the main building and the parking lot. 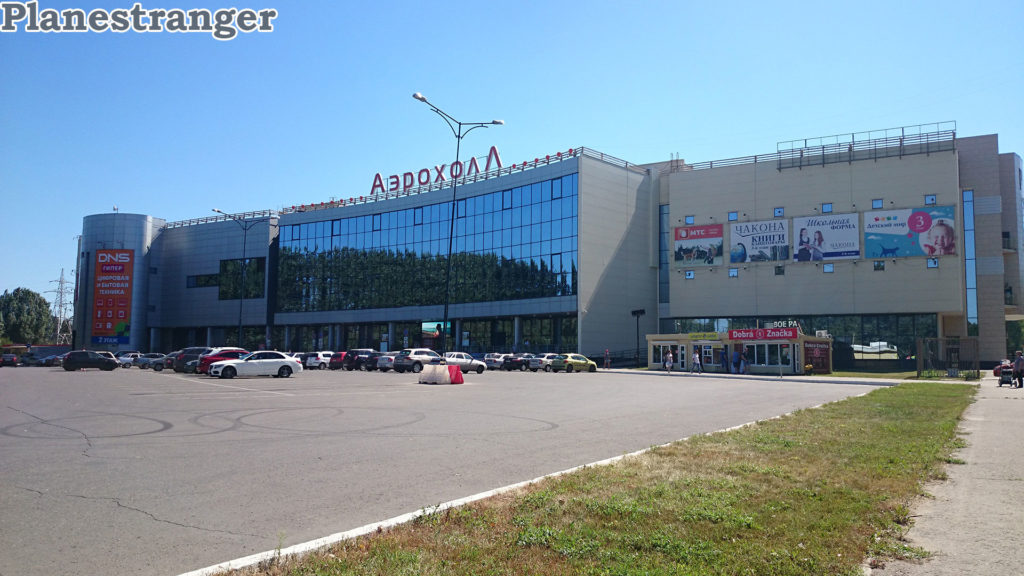 Fountain with drawn fishes and transparent elevator inside. 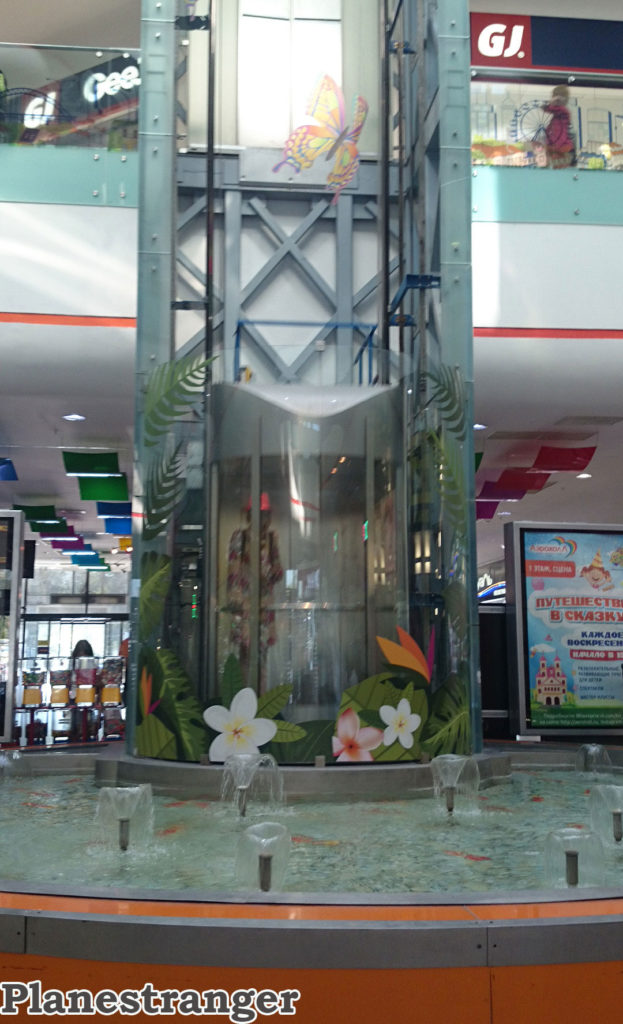 Aerohall stands right next to social apartment complex where a lot of events you see then in local criminal news happen. 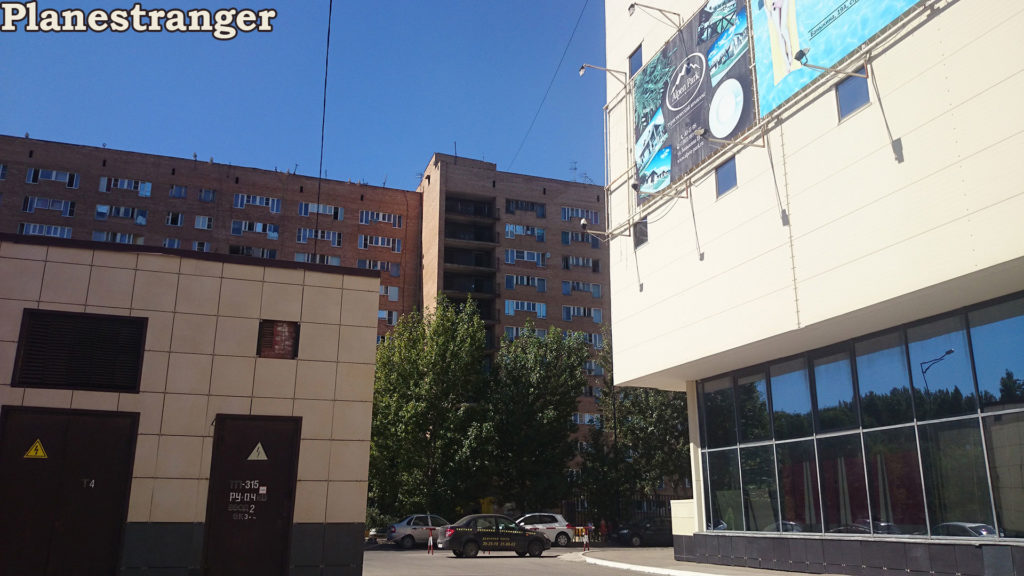 Some graffiti on the walls on shared balconies. 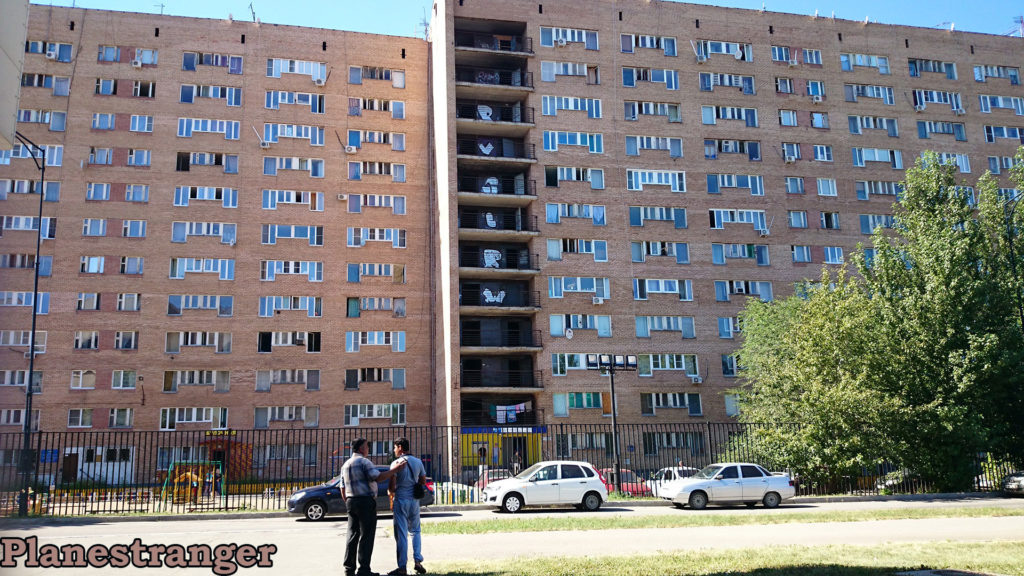 Not all the sides of the town are pleasant to look at with dusty roads and rusty posts… but, well, it’s all part of the urban scenery and adds up to general impression. 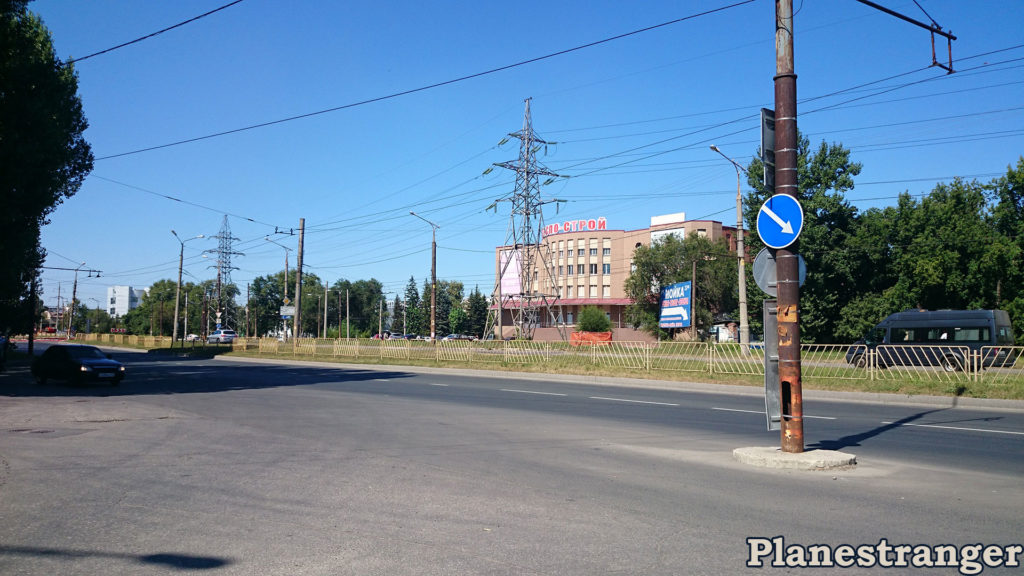 The ugliest moment of the whole day. This sloppy shit with an angle around 45 degrees legally counts as a required ramp in Russia. Unusable for both wheelchair users and walking persons. 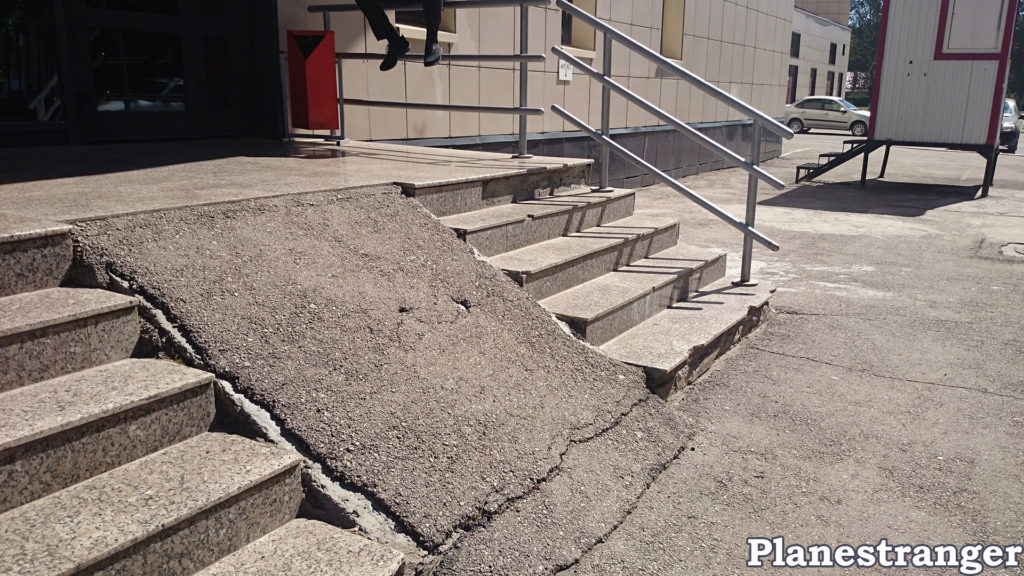 Then I moved to the part of town where few unique buildings surrounded a bit of a public space. On the next photo you can see one of just three hotels that were built during soviet era. If I’m not mistaken now it’s called Azot (which means nitrogen). Ground floor accommodated a grocery store which was lucky for me because I could stop there and buy a bottle of water. The day was really sunny and hot. 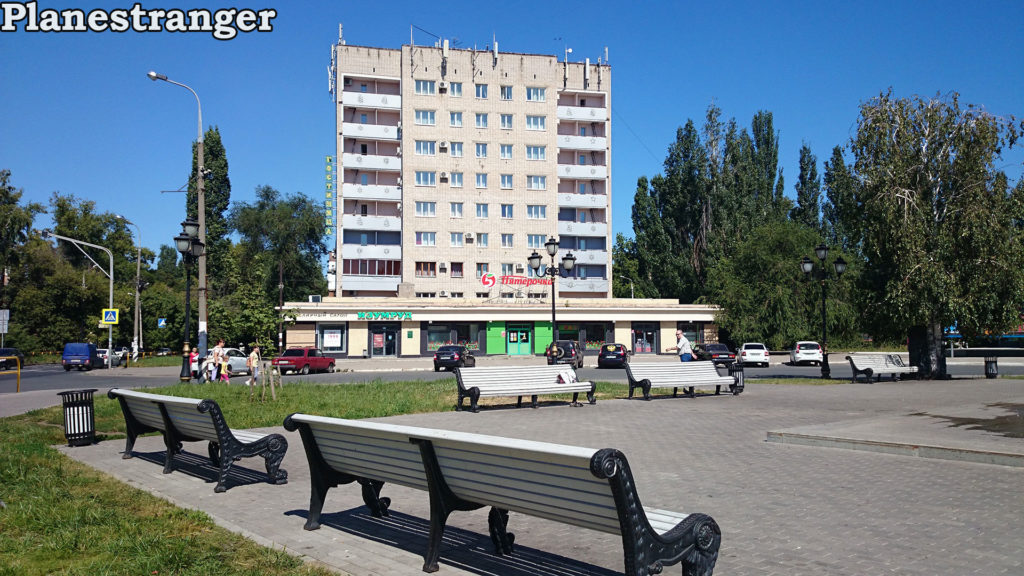 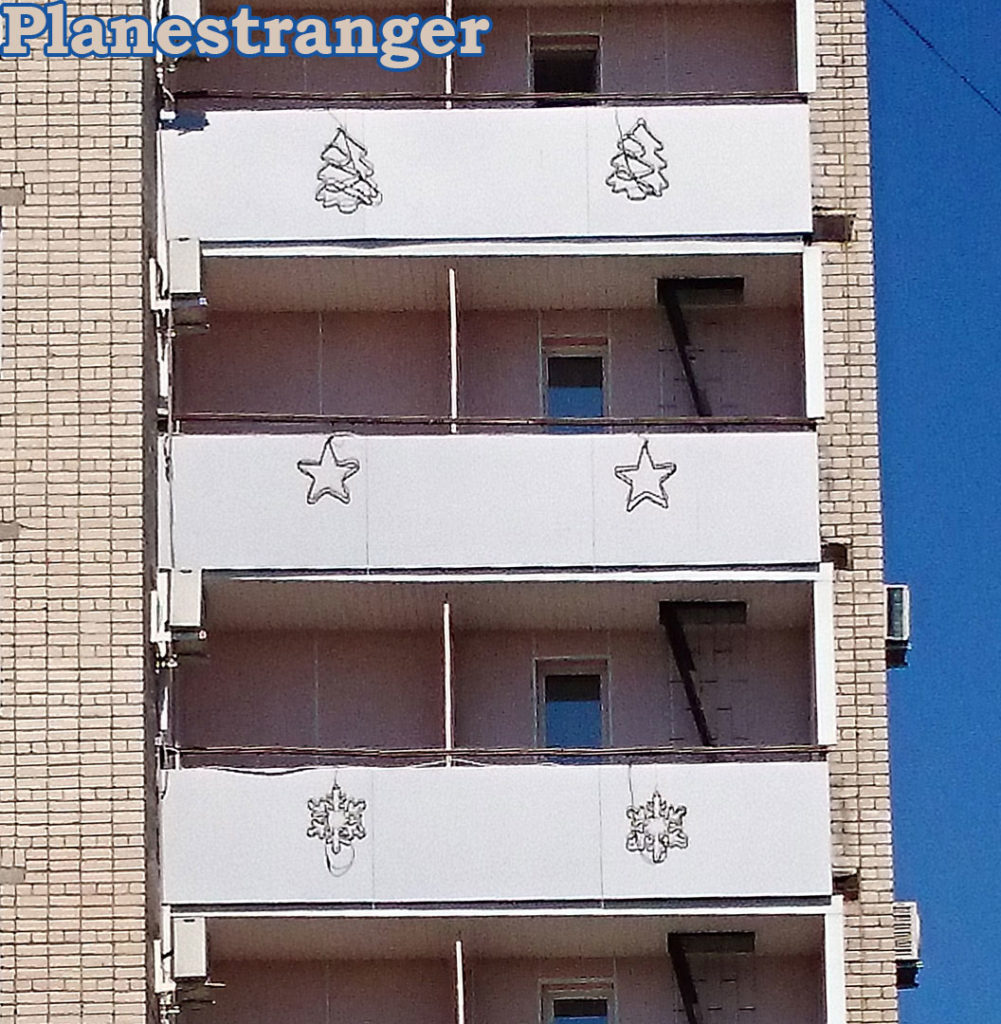 Fountain in front of concert hall. 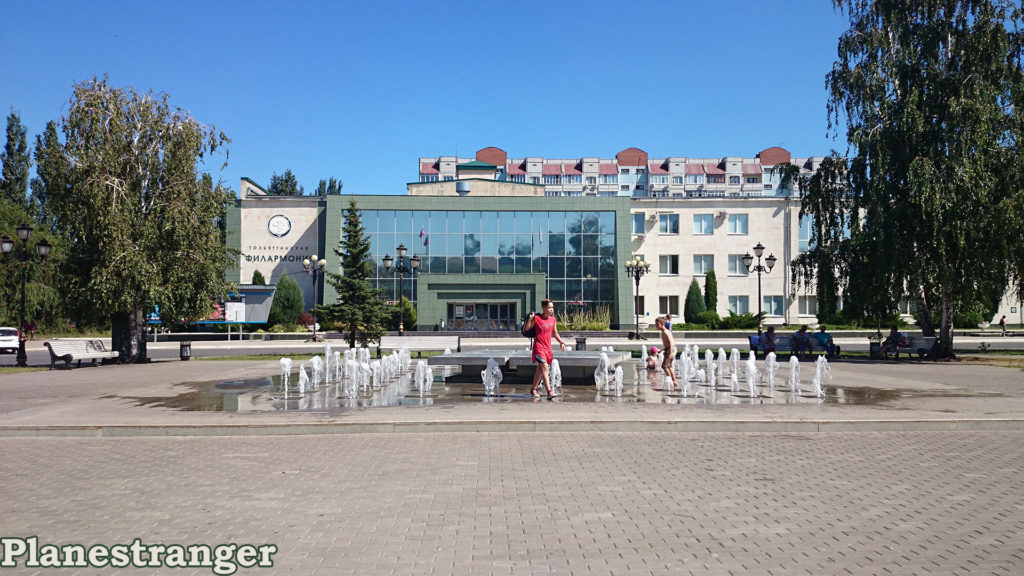 Let’s have a closer look. 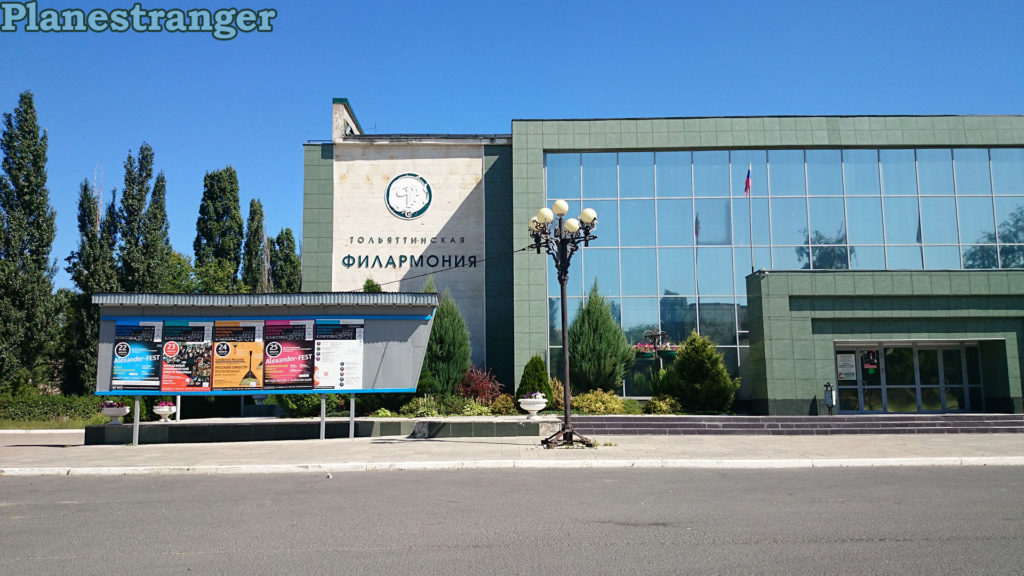 Kids carelessly enjoy the fountain. Their happiness must be spreading around because even unknown old lady stopped to express her admiration. She told me it was a wonderful moment to capture on photo. She also regretted either the fact she had no device to do it herself or that there was nobody to take photo of her –  I didn’t get that part exactly. 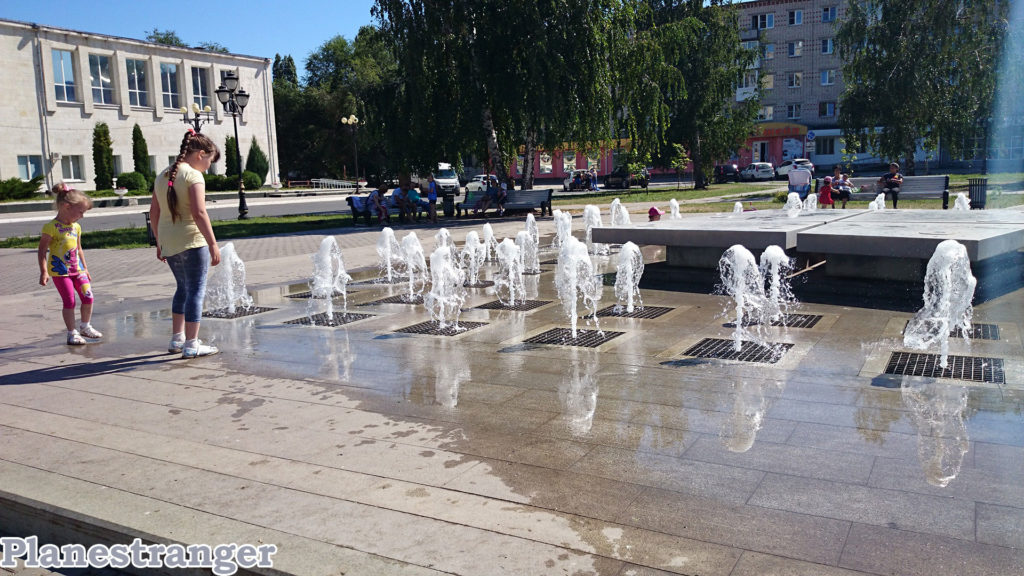 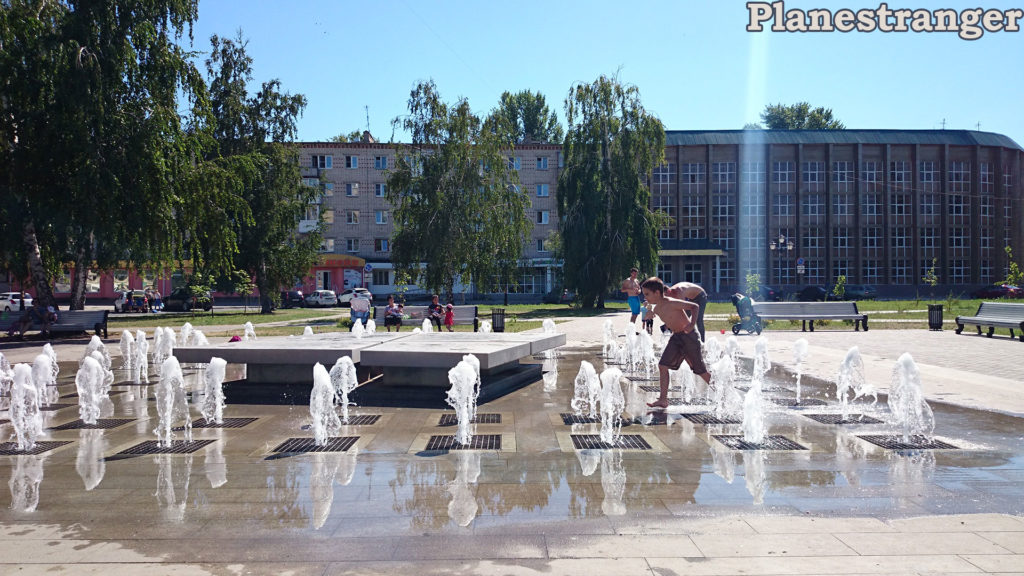 On the other side of the area, to the right there is a conservatory. So vintage-looking benches and unusual lamps supposed to demonstrate to random passer by like me it was a place of culture. 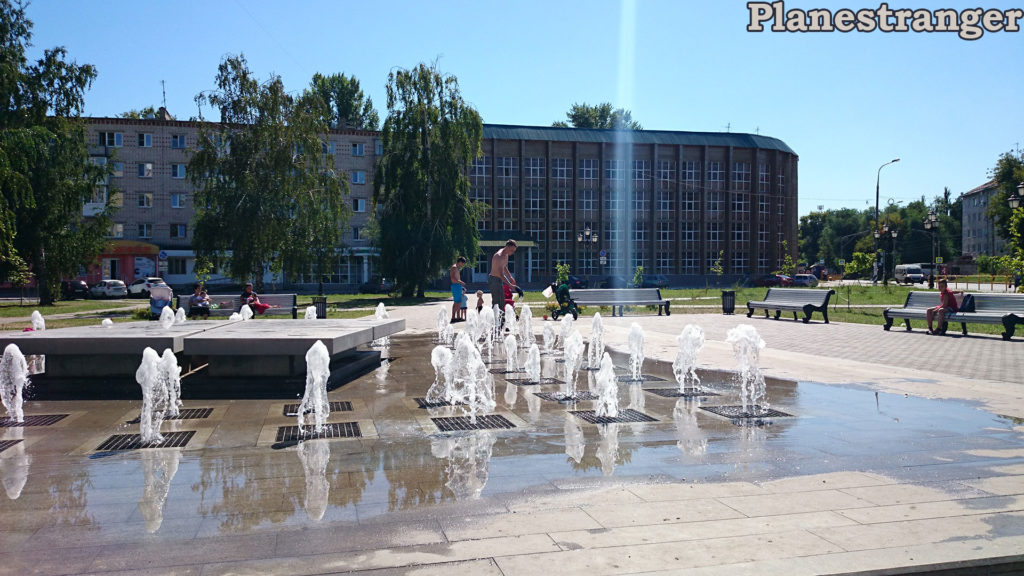 Though inhabitants of standard “khrushchyovka” nearby may have other opinion. 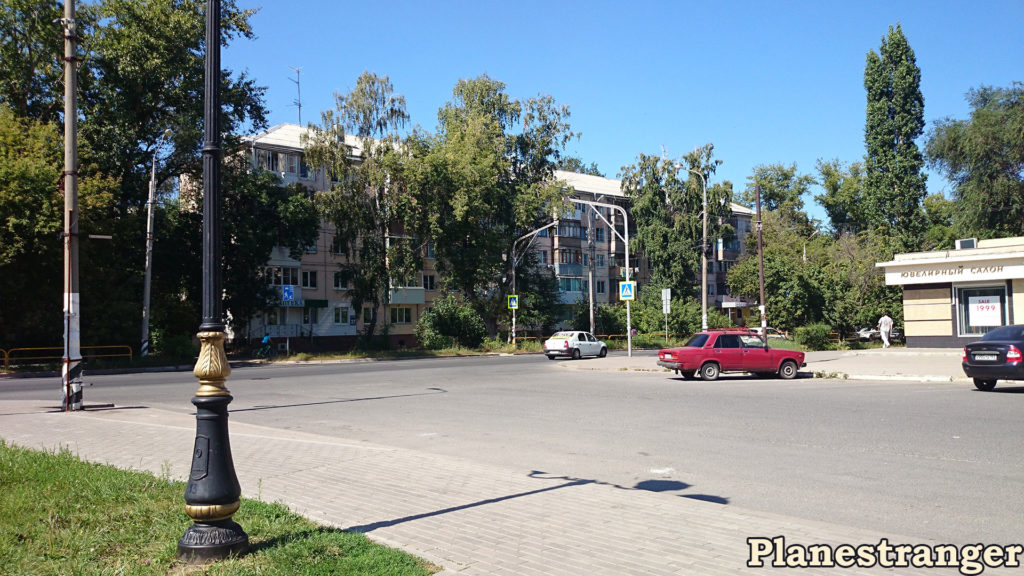 View from another point. Notice the hanging wire between lamps. 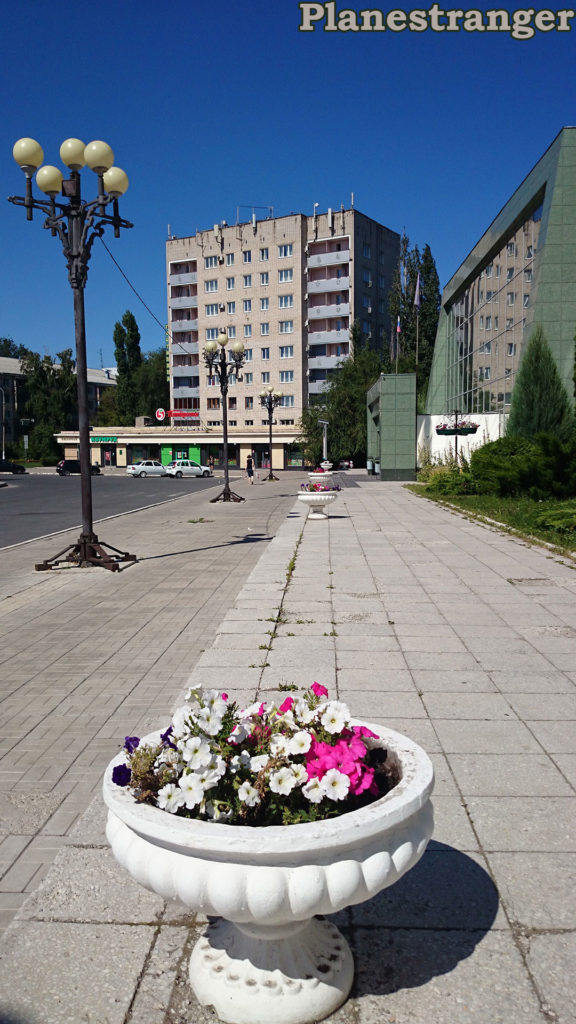 Deeper into the block the lush vegetation takes dominance. It’s so abundant and unruly you can barely see anything behind it. On some paths big trees intertwine their branches to form some sort of low ceiling covering ground from sun as if it was a forest. 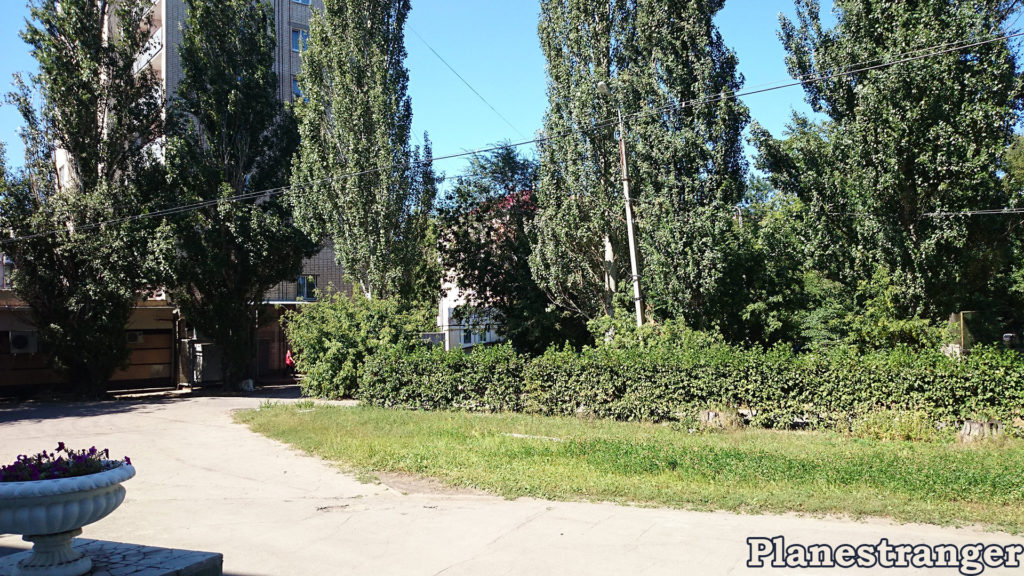 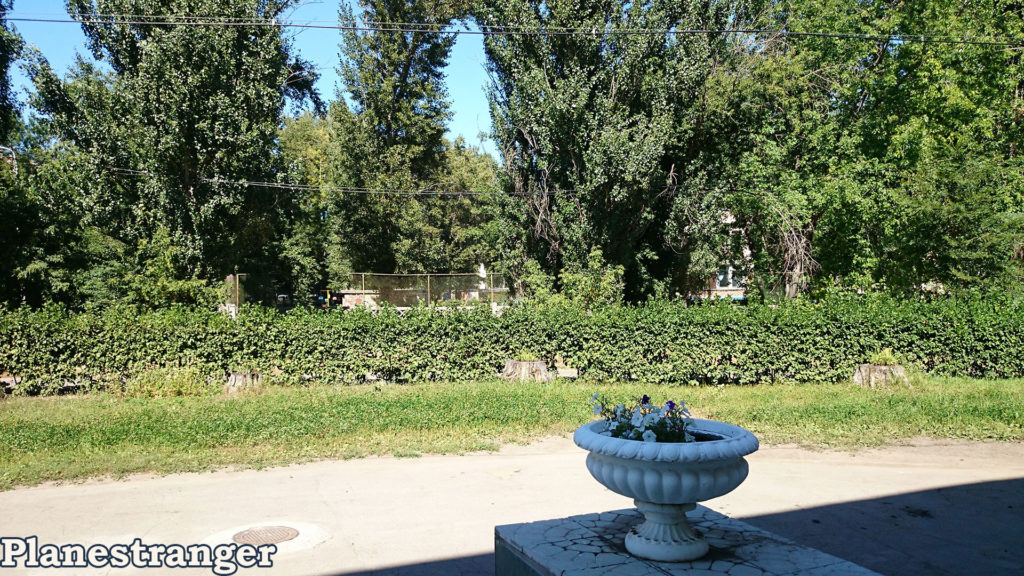 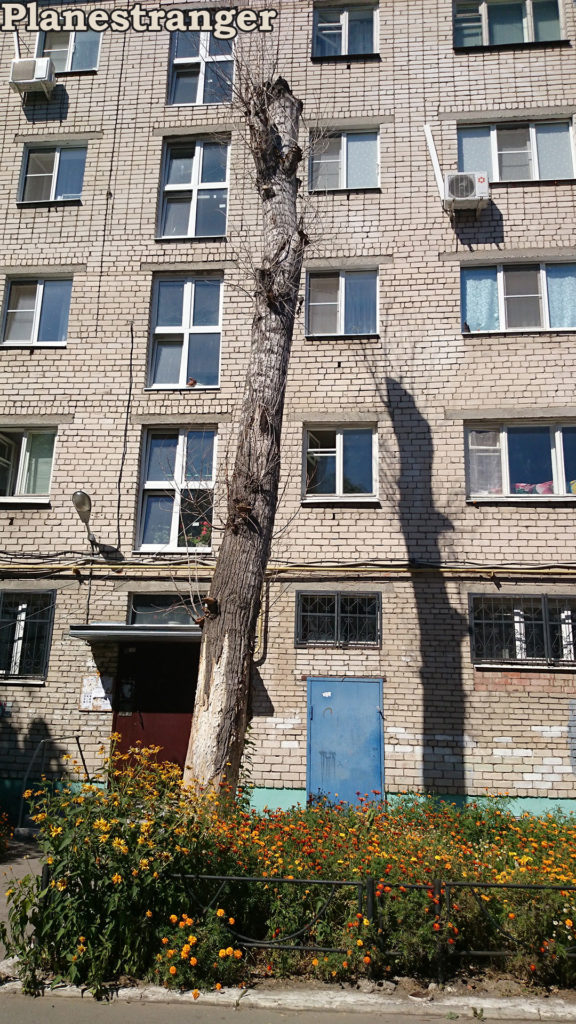 Even though living houses in this district are often worn off and neglected, people here do their best to beautify the outdoors with simple flowers. 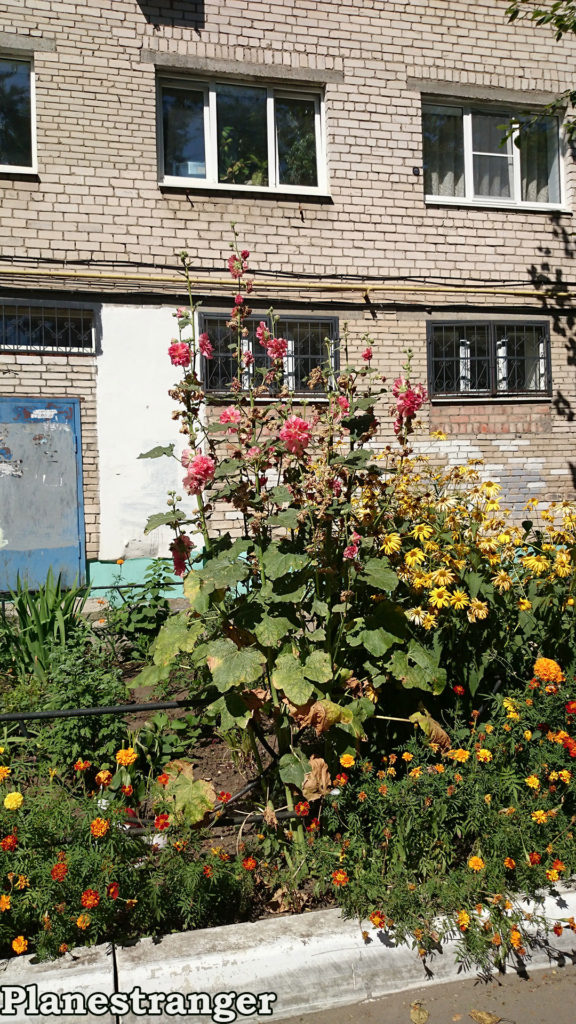 Some things you simply can’t beautify. 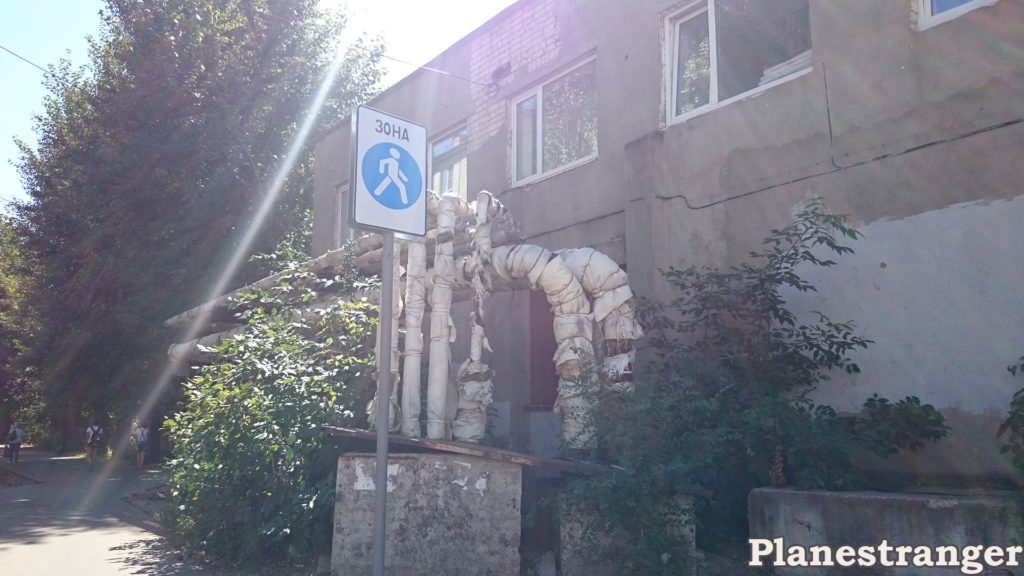 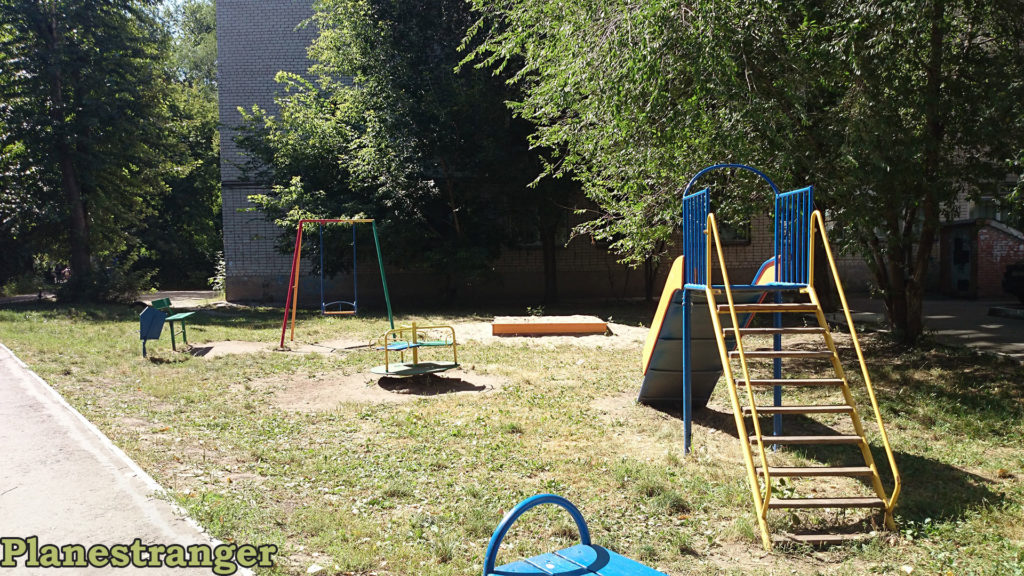 Here my battery died saving you all from more photos. Thanks for your time if you made if here. 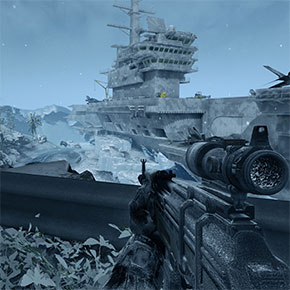