Imagine a man, who inherited and improved a business. A man who rides a luxurious roadster and walks through the beach where beautiful girls look favorably at him because he is young and his face is known to everybody in one of the best resort spots in the world. Now try to think about what could motivate that man to act? Of course, it will be some intriguing secret and curiosity it brings. Just like that, a weird letter pulls that Mr. Success out of hot Miami to travel to the tiny place in Alaska he never before knew existed.

The trailer presents Snow Dogs as a comedy. However, it’s mostly of the very basic sort. It presents everlasting classics of physical comedy like falling, running into things, getting hit and bruised. Rich facial expressions by Cuba Gooding Jr. come in handy here. Instead of a banana peel as a way to produce a smile you get ice, lots of it everywhere the action turns. It’s straightforward but effective, especially if you are in the right mood. The storyline too is as direct as a fence picket. 95% of the time the main character is on the screen. The whole world orbits him. He takes part in every event. There really are no side stories. When that southern conqueror of polar snows walks away all other people left behind stand still and wait for him to return like do NPCs in your standard open world video game. 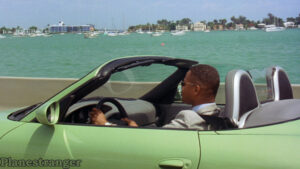 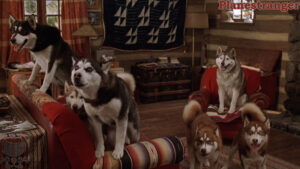 Disney’s company wouldn’t be itself without grinding all the sharp bits of the final product with the rasp of internal censorship. There are no double meanings; everything is correct and positive to the absolute. For example, a single kiss can only be of the chastest kind and it’s saved for the moment of parting. The rest of the time the max the main persona of the story can do in search of his new life is an innocent hug that looks the same with the girlfriend and with the mother. Second and the last kiss was saved for the wedding ceremony. The old cliché of cinematographic modesty that was perfectly formulated as wedding gown-montage-baby had found a use here twice in order to create a mandatory happy end. I imagine puritanical Disney was expecting that even those who became too tolerant to such a routine emotional squeezing could feel the effect. It uses the same mechanics as a chorus in an earworm pop song on a radio hoping one of the repetitions will get stuck in the head.

All that together resulted in the kids movie without a single child character in it. The theme of differences between the genetic parenthood and the legal status of a parent isn’t the most common for the younger part of the audience. Also, the impulse of a fully grown adult person to change his own life bears no resemblance to the usual stories of searching a way for oneself from the beginning of life’s coordinate grid to becoming somebody. However, the moralizing conclusions in the manner of Kyle Broflovski from the earlier seasons couldn’t be avoided.

In Snow Dogs all problems are solvable, every goal is achievable and everybody can do anything he or she truly desires. All it takes is just the courage to try. In worst-case scenario to try once more, then it’s guaranteed. Everyone has enough money, so people choose occupations and places to live according to their interests and callings. There is nobody who would even vaguely resemble a bad guy type. Even the difficulties serve not as a way to overshadow the generic happiness but as a mean to prolong the exciting adventures. To put it short, this fairly-tale is more sugary than Shrek sequels. 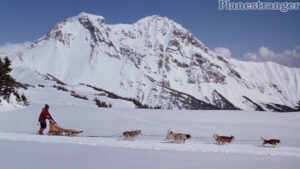 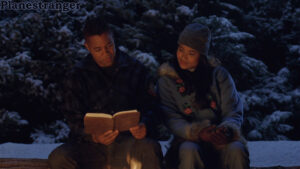 So to hell with realism, obviously nobody was going for it in Snow Dogs even if we assume somewhere in the world exist live broadcasts of dog sled racing on national television with hype, tourism, and promotional contracts with the big corporations. All damage done to the bodies, no matter how seriously dangerous it looks, becomes ignored in an instant just like in the golden standard of the genre – Looney Tunes. The worst possible consequence is a loud “Ah!” It’s harder to write off on the target group the lack of logic and consistency in scenes. First, you see the kids playing hockey on the runaway illuminated by the bright sun through the spotless sky. Five seconds later the vicious windflaw throws the protagonist on the ground even though he’s obviously heavier than the team of peewees. In another scene you see him falling into the cold water but soon the same man is walking through the winter forest wearing dry and clean pants with no traces of the icy crust.

The movie has at least one thing done undeniably right. Picturesque views of snow-covered mountains, northern pine forest, and  clear frosty sky are really impressive. If you like dogs, you can add one whole point to my rating. Well-groomed huskies were presented for the observation at all angles. It was evident from his work on Beethoven the director Brian Levant loves barking kind of pets. On the other hand, if you’re a cat person it’s minus one point.

The magic of computer animation adding the human expressions and emotions to animals’ muzzles could be seen as a pro back in the early 2000s but looks completely outdated now. All it does today is adding to the resemblance to cartoons. 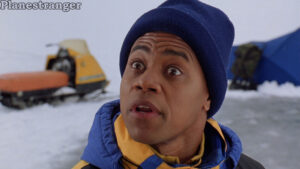 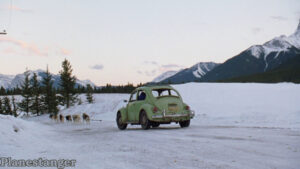 Snow Dogs can be useful when you need something to watch in the company of children or their ultraconservative parents. Hank Hill would probably approve of it. At least nobody sings here unlike many other popular Disney’s cinematic products. 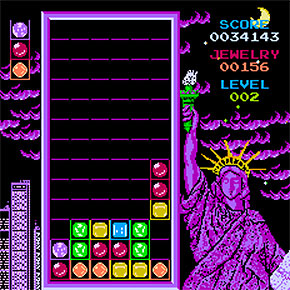