Despite the risk of making impression of one more banal dead heroes fan on some inattentive readers, I must begin this review with comprehension of the position director had in rather thin cultural layer of Russian cinematography. While Alexei Balabanov’s earlier movies (“Happy days” for example) weren’t well known to the general public due to experimental nature and creative search for new forms at historical moment that wasn’t quite right for that, he hit the huge success later with one good shot. “Brother” wasn’t just unbelievably successful movie (which deserves its own story), it also started the strong line of movies that found different paths to the minds of many people. Some simply admired the determined and forceful heroes, while attention of others was captured by ably applied provocative themes. More sophisticated part of the public also had place to look for the deep meaning in shrill realistic drama and even European festival circles weren’t put aside of that. “War”, “Dead Man’s Bluff”, “It Doesn’t Hurt me”, “Morphine” – here are just few most vivid and memorable titles. There surely were some other sporadic local breakthroughs by different Russian directors, but no one else was as consistently good as Balabanov while being fully involved in work as true author and therefore stylistically recognizable. 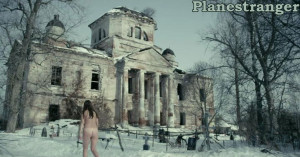 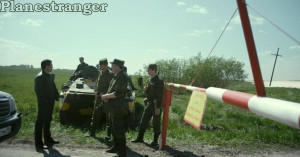 Now with the realization of this fact let’s focus on his last work – “Me too” which once again wasn’t left me indifferent. This movie could be called the rethinking of famous “Stalker” in way of Russian orthodoxy with overloading of sometimes painful realism. The story that switched from sci-fi to mysticism is still very alike. It tells us about the group of people who’ve had enough in their lives that go to some wondrous and deadly place “somewhere between the Saint Petersburg and Uglich” in the quest of obtaining happiness. Well, saying mysticism is a bit of exaggeration because I meant not the dogmatic, fat, official Russian orthodoxy that speaks from high positions, constantly protests against something and kills its own congregation by expensive cars but rather naive and down-to-earth one. Metaphorically saying it’s orthodoxy narrated by simpler folk who’ve never read the Bible but who believes “there is something”. So in this film you won’t find judgemental rage or strict sacred rituals like in “The Exorcist” but there is plenty of primal fear, echoes of the pagan consciousness and scary stuff from popular folklore opening to the attentive eye. Even the incomprehensible and intangible higher power that presents here doesn’t vent its canonical anger upon the heads of unworthy. On contrary it silently ignores them leaving them to spend last minutes in deep uncertainty what was wrong. So you have no idea was it god, was it devil, great cosmos or smoke in mirrors.

By the way, what’s wrong is a really intriguing question. I personally am very far from idea of separation of people on totally good and absolutely evil like in mormons’ books. Moreover the group of characters in “Me too” has enough diversity and the only one thing probably to unite them is fact they have nothing to lose by and large. Fantastic phenomenon from Russian boondocks apparently works the same way everyday material world around us does: some were given, others weren’t, somebody was taken to the happy neverland, somebody was left to die on the dull earth. 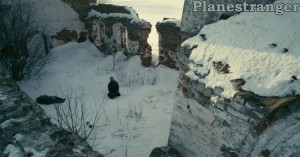 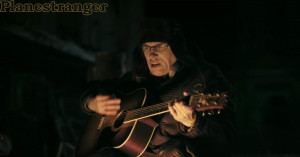 There are more differences from “Stalker”. Strugatsky brothers despite being somewhat off the fickle political course were possessed by truly soviet idea of decomposing, analyzing and estimating every thing to cultivate those useful for their purposes and to destroy those that aren’t. Alexei Balabanov presents us pure chaos of existence through the eyes of worn-out man who have no time and no energy to find out the secrets of nature. That man is ok with gods’ chariots rattling in the sky and goblins lurking on the outskirts of the village. People in the movie are different from the poetic stalker portrayed by Tarkovsky. They don’t carry on lengthy conversations about the meaning of power and weakness, statics and mobility. They just breathe in abruptly after taking a sip of bitter alcohol medicine for too thickening reality. There is nothing to admire but strangely still something is catching you. Maybe it’s a poignant drama and familiar feeling of despair.

Regretfully some actions and their consequences are questionable, sometimes completely illogical. That’s where the visuals step in to bolster the whole construction. It’s filled with the aesthetics of frozen hell from western mythology where Russian people described in bylinas manage to live for centuries. Decay, darkness and death with time enshroud characters more and more tightly and seemingly touch the mind of a viewer as well. Because of that there is no time to seek out bloopers and technical mistakes. Look here! Second slanted electric pole that resembles cross. Was it a reference to “Spirits of the Air, Gremlins of the Clouds”? No, perhaps not. Why is this girl in desperately try to survive the cold rushing to the drafty ruined church without a dome where the light of christian eternal life in the murals on the walls was trampled by inexorably disintegrating bricks instead of running to one of the abandoned houses? Considering such a satiation of visual images it’s almost shocking to know no decorations of any kind were build for the filming. Turns out moving the camera in the opposite direction from centers of civilization was enough work. Though view is fascinating in the city too. This includes Saint Petersburg in may with paint peeling from the walls, its claustrophobic courtyards and century old buildings which purpose you can never guess by the exterior. Most of the time those masterfully adjusted scenes are accompanied by psychedelic, almost shamanic rhymes whispered by Leonid Fedorov. The final result is so good that even when two fortune seekers move through dirty corridor with no words spoken it’s still not boring at all. 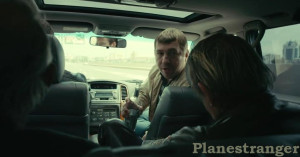 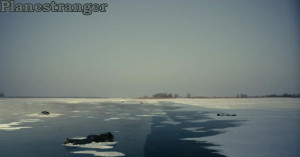 The approach to acting is the same as with filming locations – to maximize the use of actors’ nature. They had not much to add their play. I don’t know for sure was it a big win in casting or scenario was written with certain actors in mind (some of them appeared in previous Balabanov’s films), but almost all of them had to play themselves. The role of determined thug was given to Alexei Mosin who actually fought in Afghanistan and Chechnya. Young son of the director Petr Balabanov played the unusual boy with strange abilities. Laconic old man in telnyashka was performed by rustic looking person in years by name Victor Gorbunov (internet shows nothing about him). Oleg Garkusha and Alexei Balabanov himself had roles of seasoned Russian rock musician who brings his guitar everywhere and famous movie director respectively. They didn’t pretend to be somebody, they lived few hours on camera. You can not be more natural than that.

Likely “Me too” didn’t become greatest Balabanov’s movie. He put himself in such a high standard of expectations that it became a very difficult task. Nevertheless this work is important both to form a correct perception of his whole way as creative author and to understand modern Russia as it was described in song – “half of the head is gone, half of the head is poison”. At the same time it is the demonstration of succession of generations and connection between different ages in the world of arts. Humanity always craves for happiness but even it the fairy-tale it seems impossible to everybody without anyone going away unsatisfied. 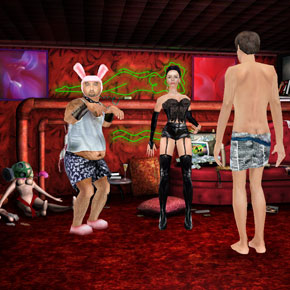