I was always interested not only in traveling to fictional worlds but also to the other parts of our quite real blue and green ball. Not long ago I was able to find time and to satisfy my interest to some extend. In this post I want to share my photos and impressions of Prague in May of this year the way it presented itself to me.

Before we get to the main theme, I have to mention my point of departure. Kurumoch airport near Samara has undergone a renovation recently. I must give credit where the credit is due, the job was well done. Airport now is comfortable, stylish, completely modern and civilized with a lot of consideration given to details. Getting a little bit ahead of myself, I’ve had a far more positive impression of it than of Václav Havel Airport in Prague.

A colleague of movie racer from Marseille tried to talk to me all the way to avoid falling asleep and got me to the the place with a lot of time still left, because speedometer in his Škoda Octavia was showing number greater than 140 km/h multiple times during the trip. On a night intercity road that lacks street lights and even other cars, while it felt like the asphalt was coming into existence from the emptiness of the universe right before the wheels, such speed was high enough to tickle the nerves. The driver told me he has been driving for more than 16 hours and had visited four towns that day. 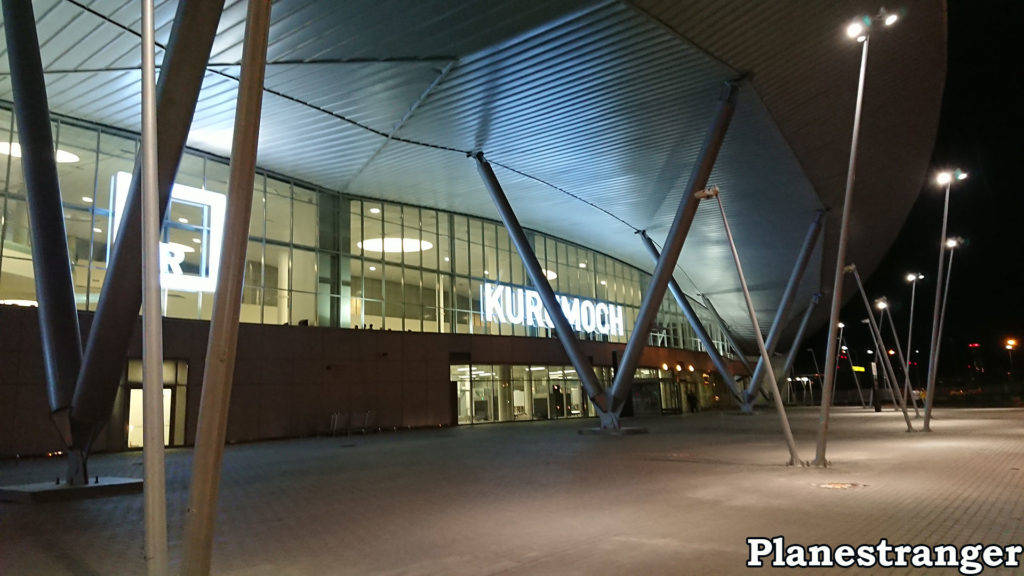 Notice there is even baby care room to the left of duty free store. This hall after the customs and border control was lighted mostly by a huge screen. 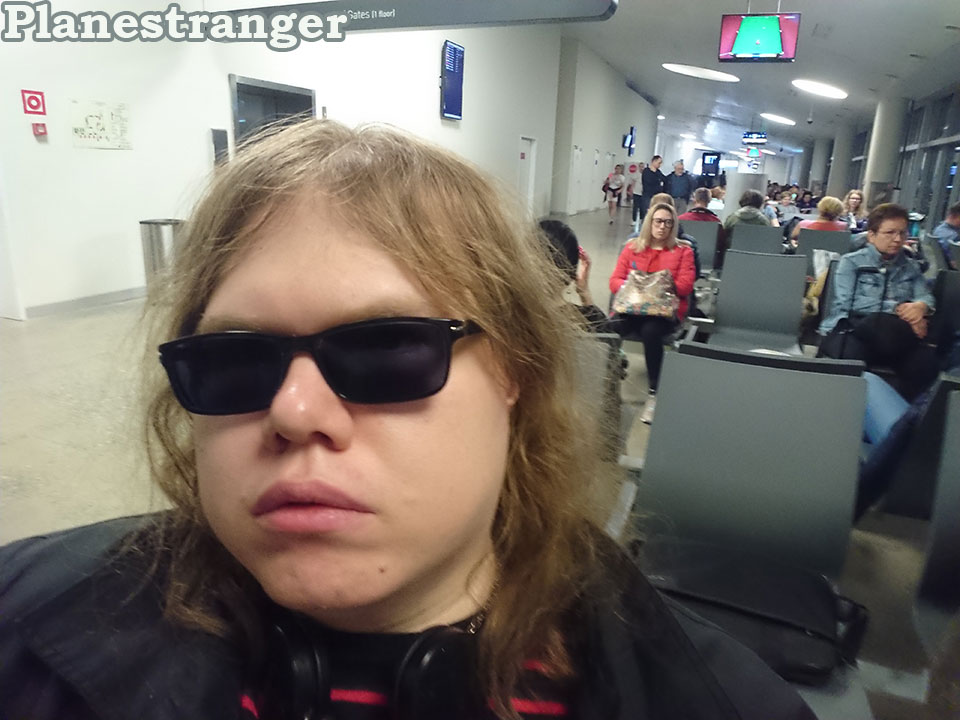 Took a selfie while waiting for the boarding. I still don’t really know how to do them. 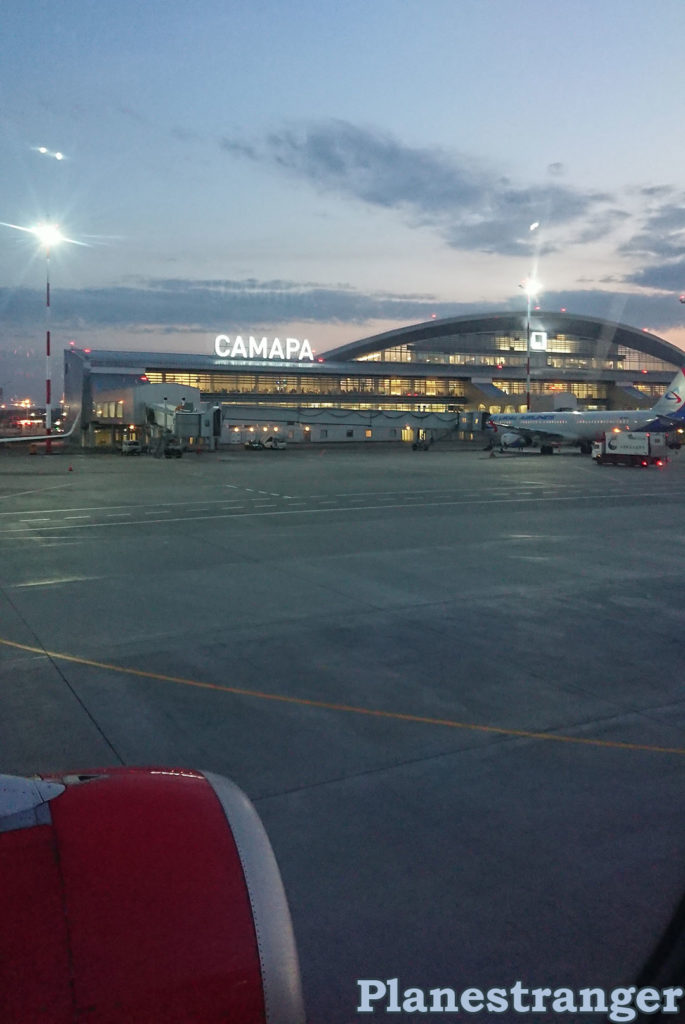 The last look at the airport before the takeoff. It was really dawning already. Soon Airbus A319 of Czech Airlines started the acceleration. 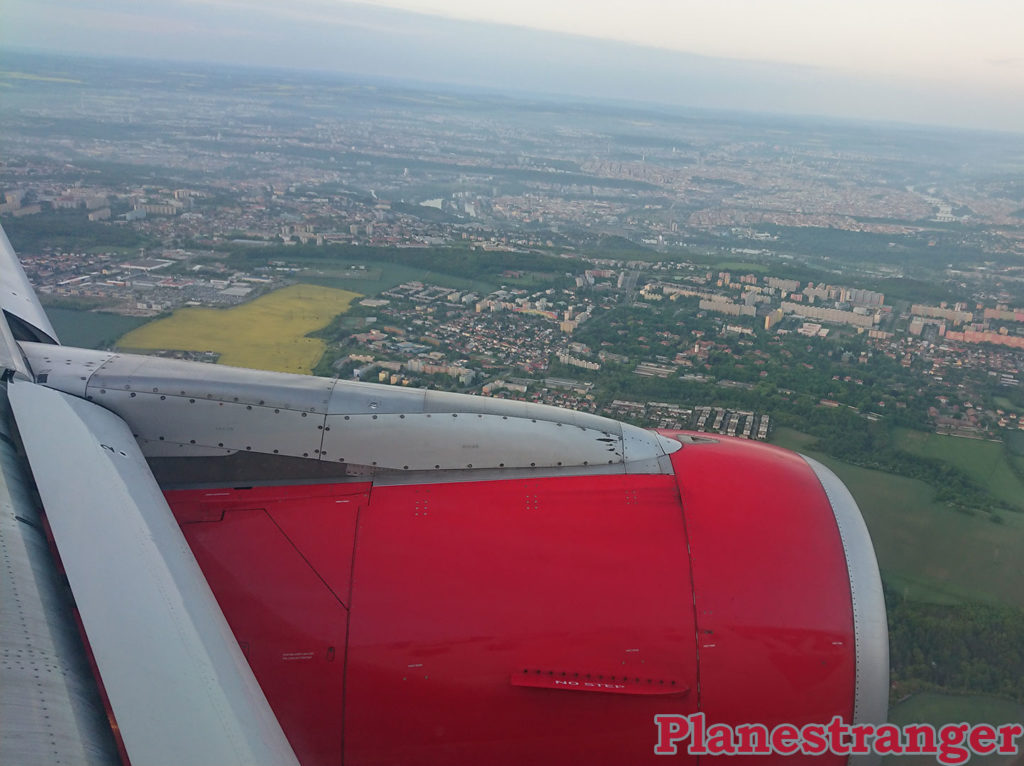 That is Czech Republic already, after three and a half hours, viewed from above. Though that’s not Prague yet. It’s quite interesting how low we were during the last part of the flight. 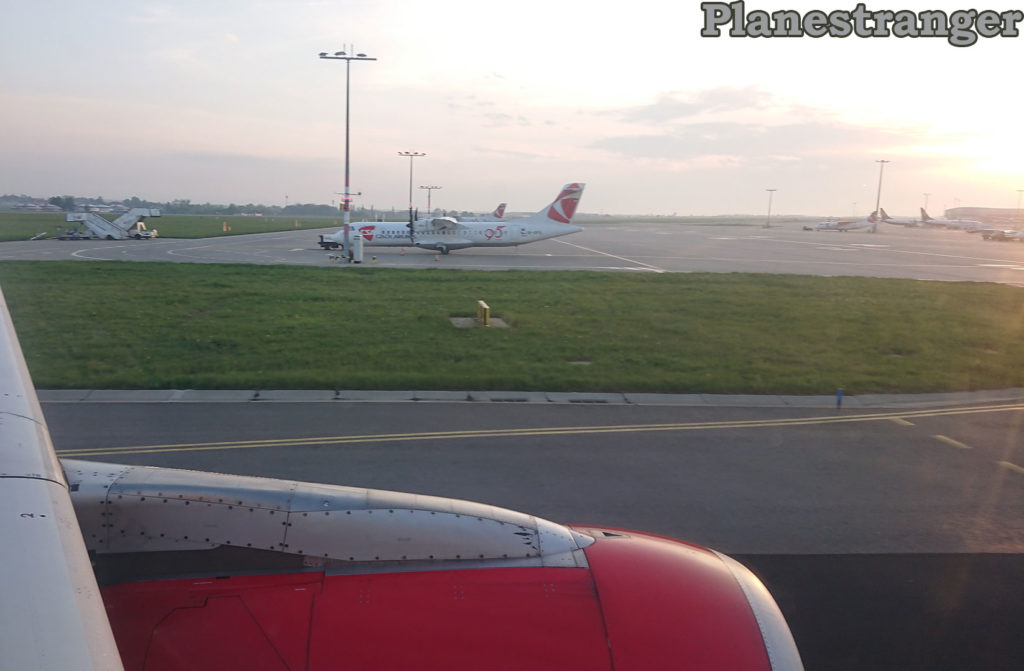 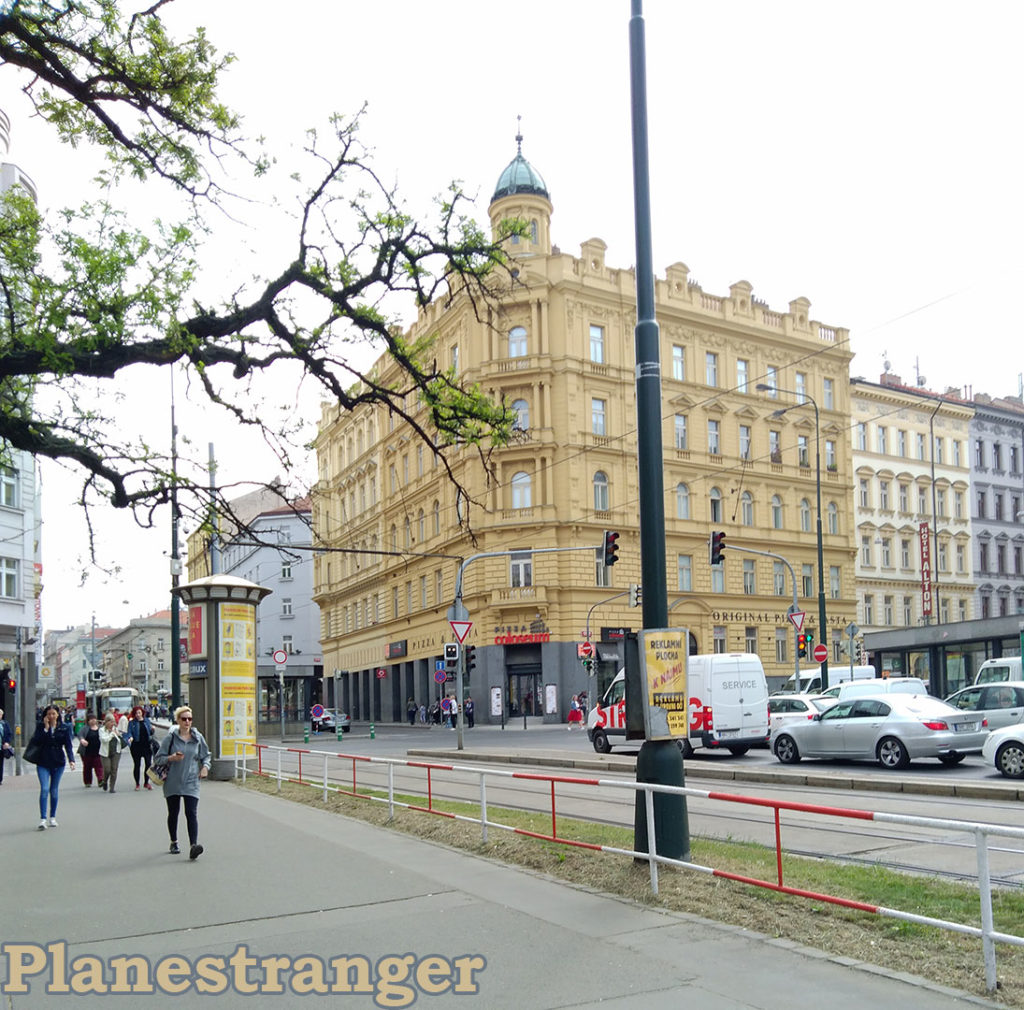 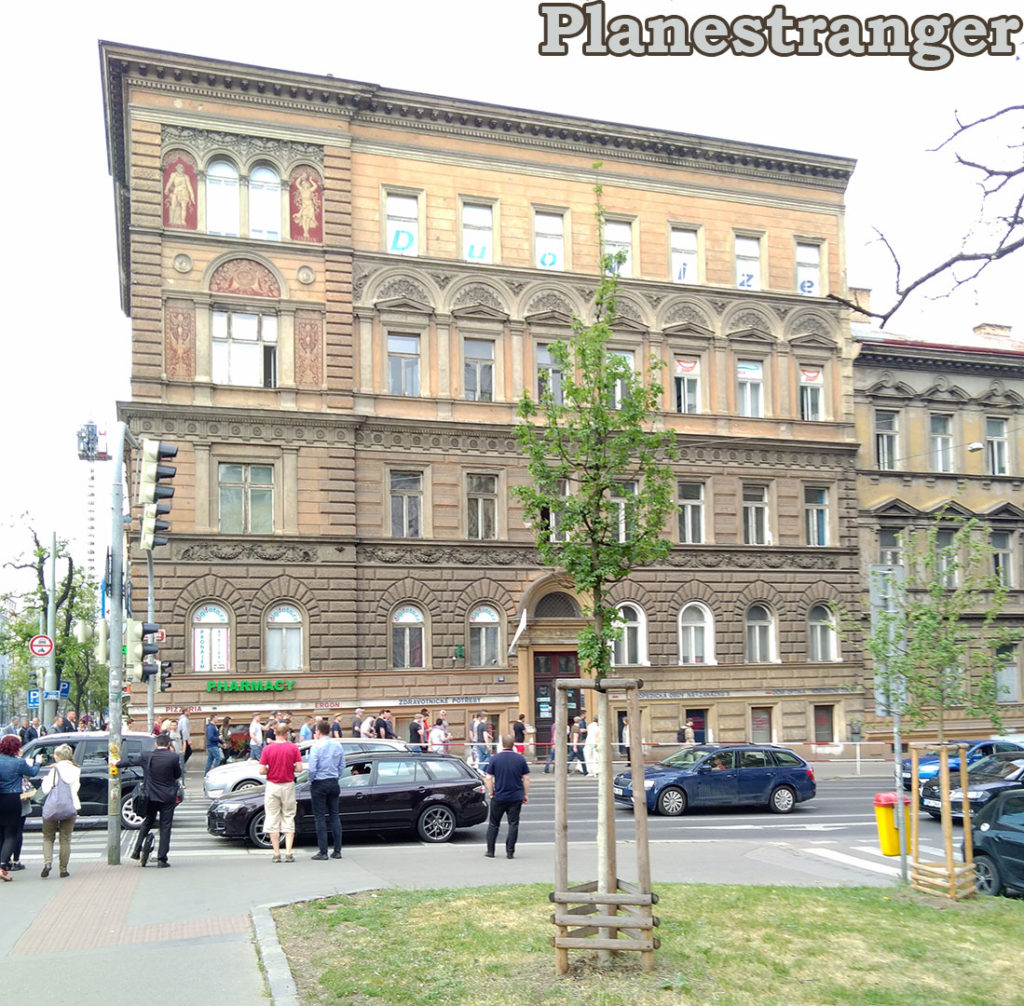 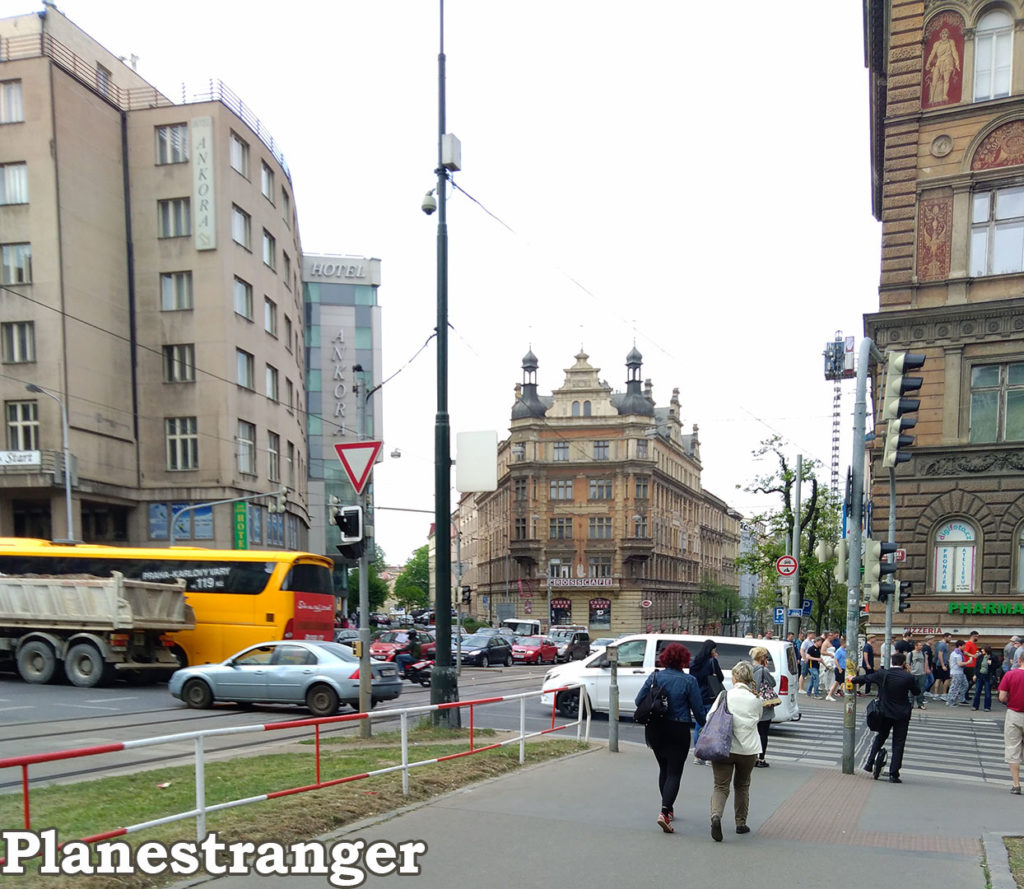 Near the I.P. Pavlova subway station. Take a look at the truck in the last photo. It’s pretty unusual thing to see in the center of Prague. You have a better chance of seeing Ferrari there. By the way, about the bus. Those are exclusively for transporting tourists. Locals have to use streetcars or subway.

I must say that my first day there included many troubles, one of which was total lack of Internet. Before the flight I had consulted my mobile provider (MTS) about what I need to do, I had added fair sum to my account, activated option for data roaming (which cost a bit more than 7$ per day for unimpressive 128 Kb/s). However there was still no Internet access for me. I could receive SMS about my banking operations and incoming calls fine. At the same moment WWW was indifferent to my shamanistic actions and kept rejecting all attempts to load anything. Wi-Fi at the hotel was also at the level they were allowed to mention it without false advertising. It was so unbearable slow and unstable I couldn’t even view simple static pages or email mobile provider’s support to resolve the problem. So without maps or any other sort of navigation I was for some time trying to find Starbucks near the subway station called in the name of Russian physiologist as it wasn’t particularly easy. At one moment I had lost faith in my ability to find it, so I started asking people on the streets to show me the way. In attempt to be polite in a foreign country I was speaking Czech (well, I was trying to the best of my ability at the time). Turned out all the people passing by who I guessed could be visitors of such pretentious coffee place were also tourists who didn’t understand Czech and were unfamiliar with the city. Only on the eight or ninth time two nice Czech ladies helped me. I was very close to my target after all.

At Starbucks I must had been looking like a total weirdo buying three plain black coffees without anything else. It didn’t matter because there was new fast router that allowed me to connect to MTS support and to force them to provide service properly. With google maps and online dictionary it became much more comfortable to explore Prague that I have never seen before. That was the moment I could take a deep breath and start enjoying my vacation. 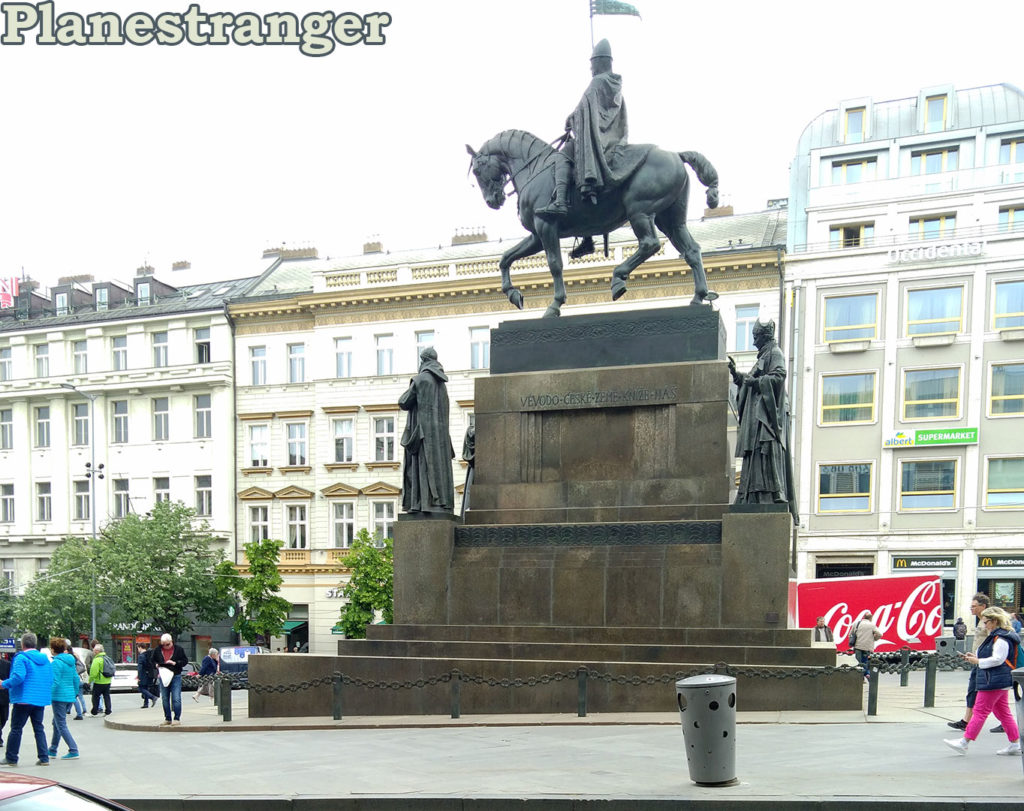 Statue of Saint Wenceslas surrounded by four other Czech saints. 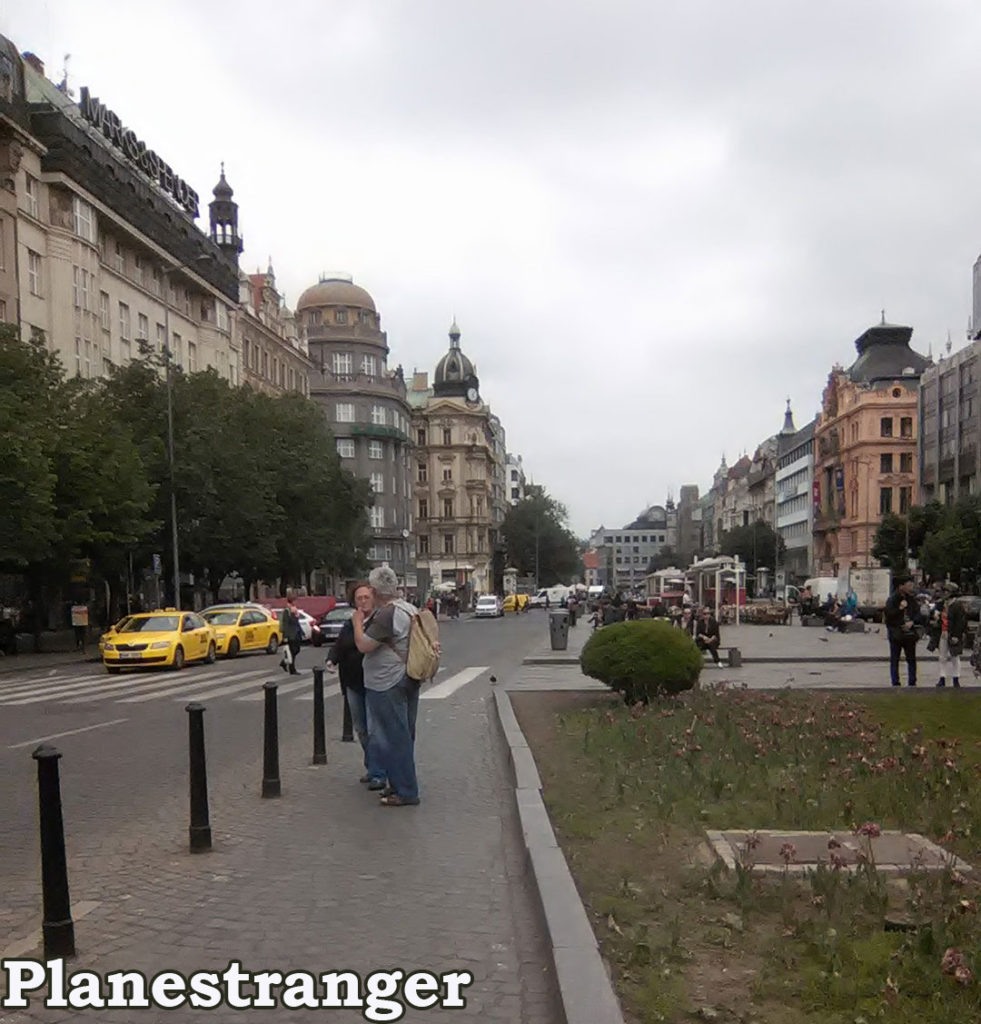 Wenceslas Square. At the information booth there was very polite English-speaking young lady that provided me with paper map with one of the best exchange places in Prague marked on it for free. 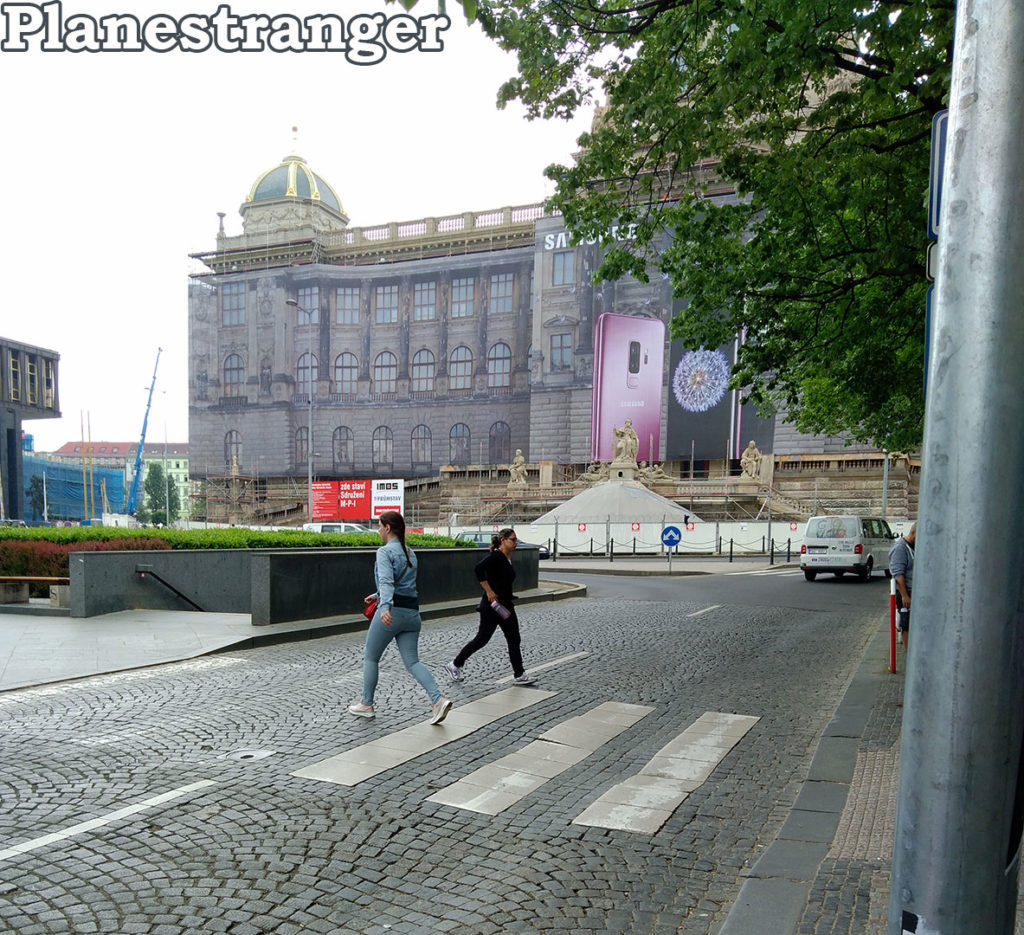 National museum was undergoing the restoration at that time. Once I photographed crosswalk I should say that there are many of them in Prague, and usually there is not need to jaywalk. Most of the drivers are unbelievable polite. They let you go and wait for you even when you haven’t reached the road yet on unregulated crosswalks. 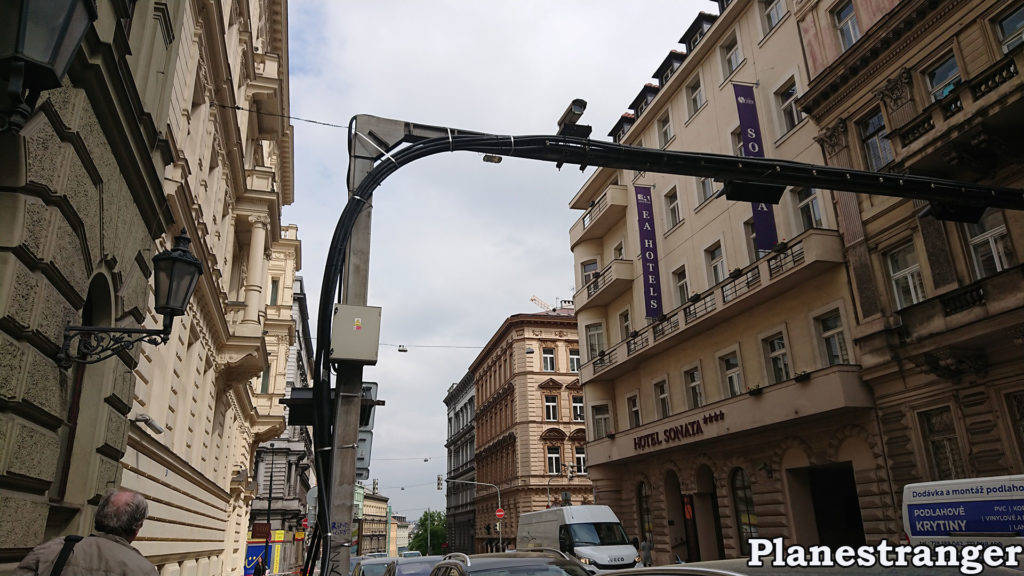 Sokolská street is one of the busiest in Prague. Thick cables come down to earth without any additional isolation. Nobody seems to have an idea to protect them from vandalism or metal looters. 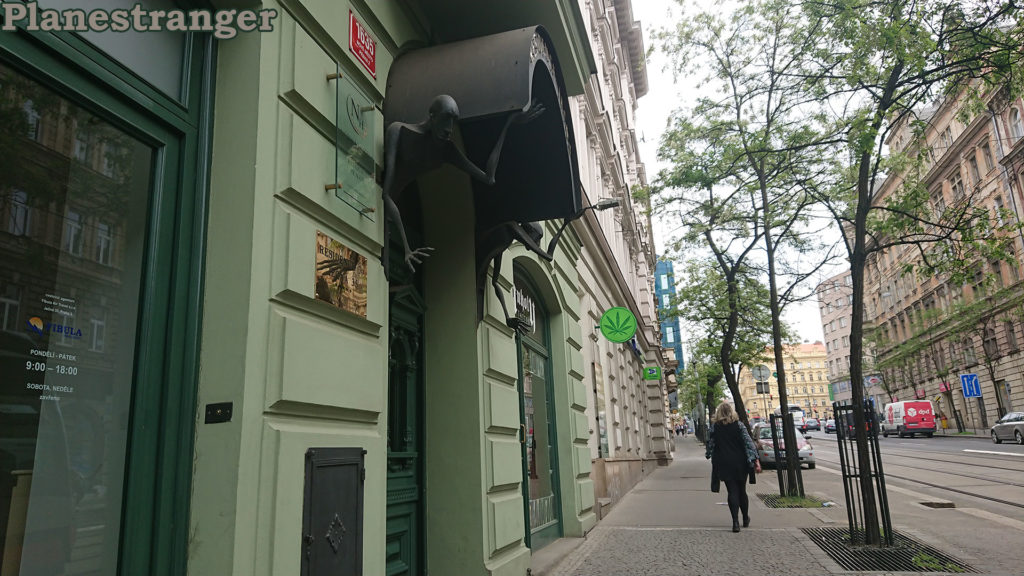 Monstrous figures at the entrance with hookahs and cannabis leaf behind the glass make it hard to walk by without at least taking a photo. 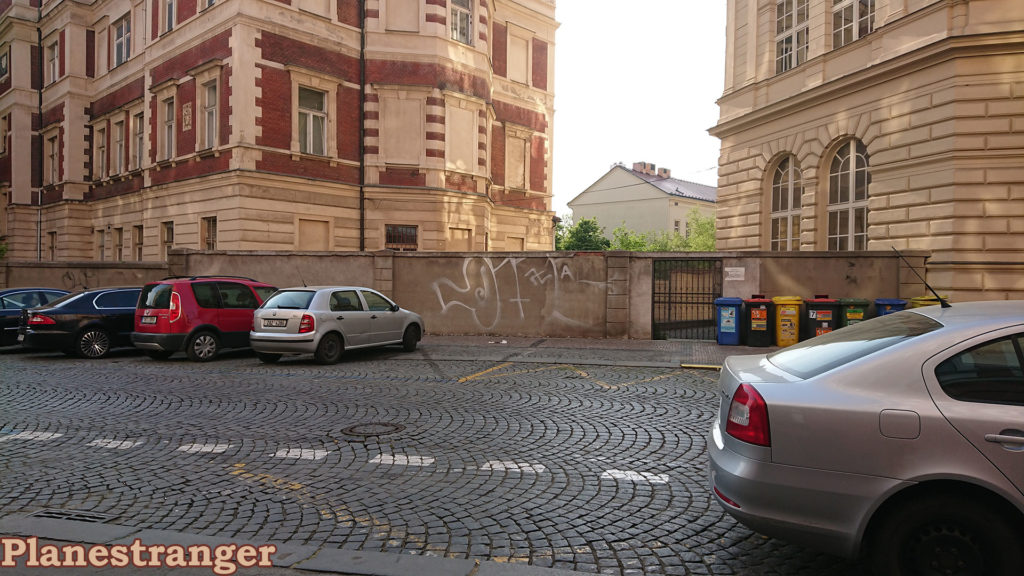 An eclectic picture in the quiet street of so-called “new town”. Soviet-looking crude building in the distance coexists with more noble pieces of architecture. The scenery is completed with modern cars on the old cobbles, trash cans and ubiquitous, exceptionally pointless and tasteless graffiti. 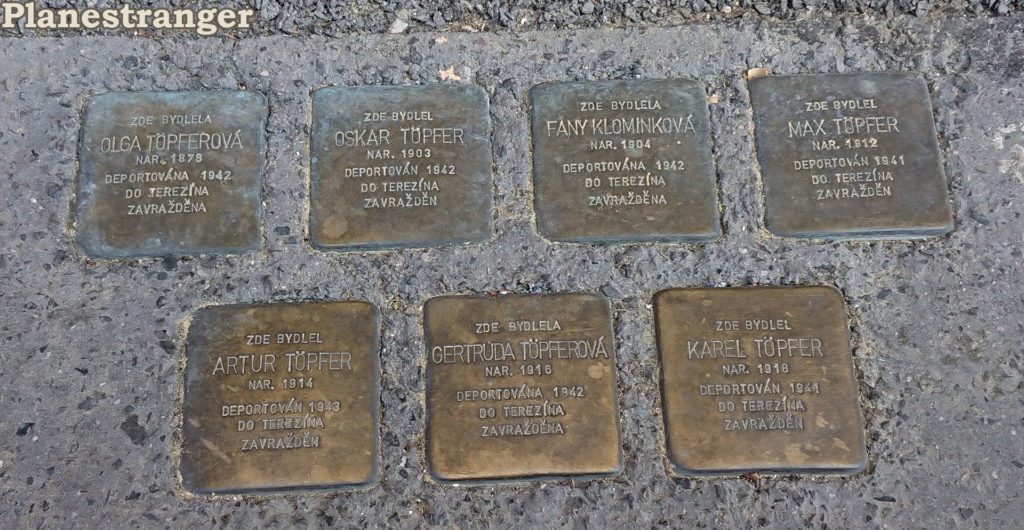 Metal plates to commemorate the victims of nazism that once lived there. 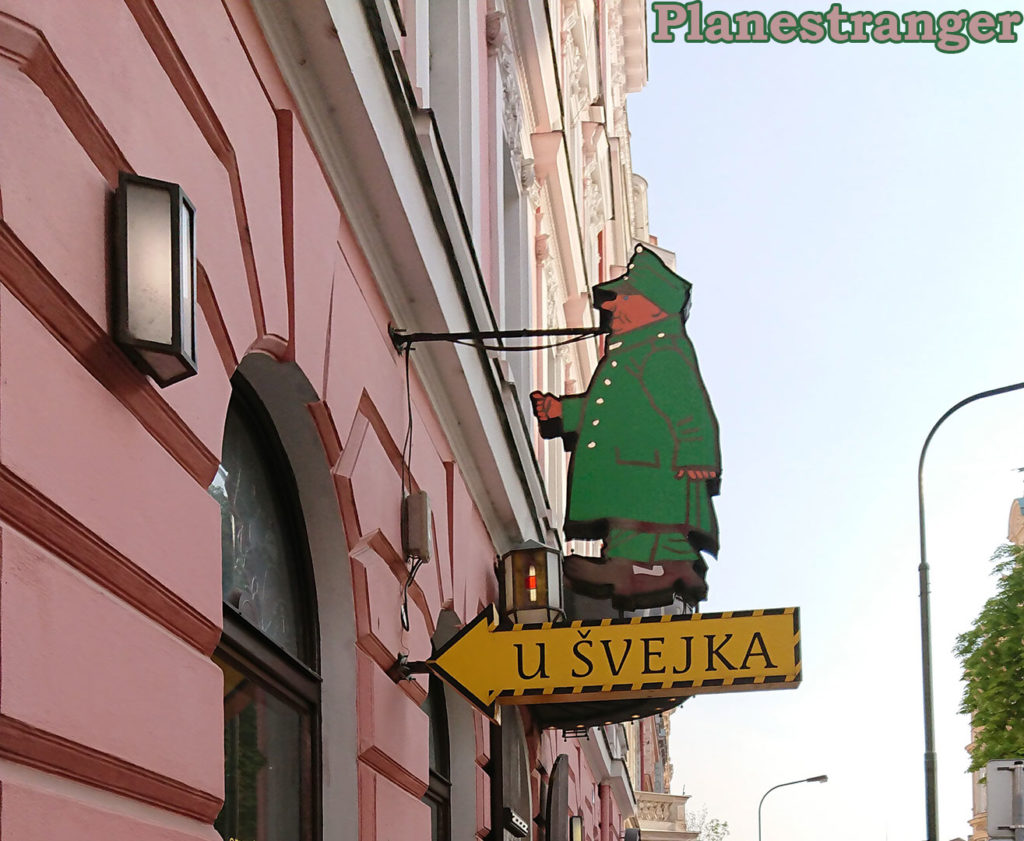 How is it possible not to visit Švejk? 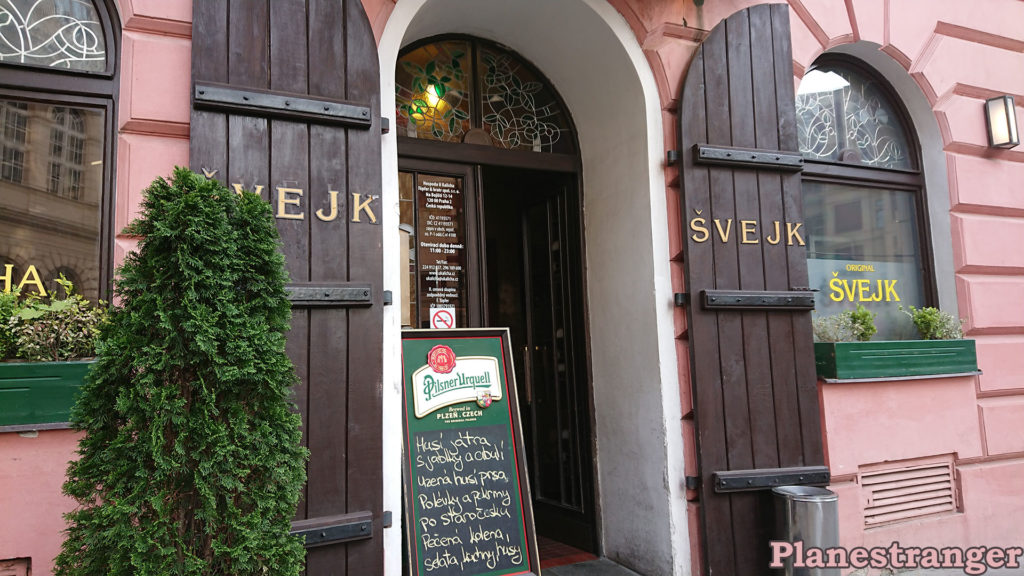 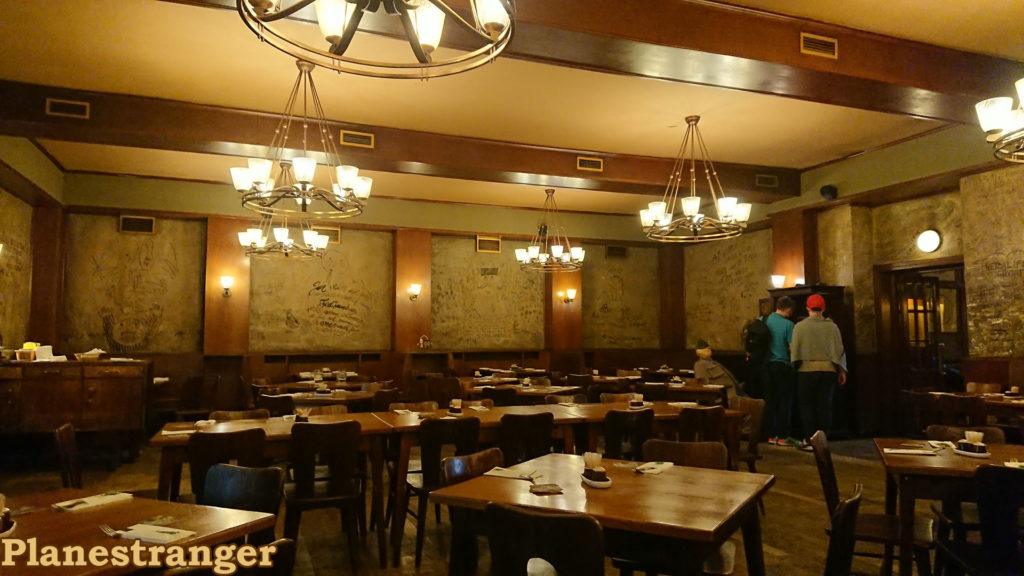 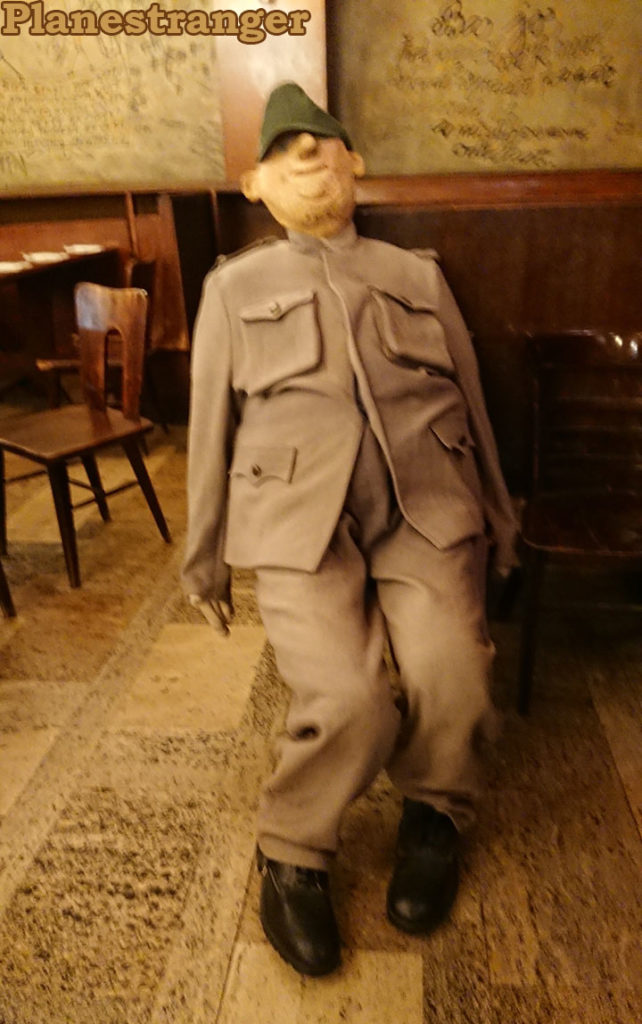 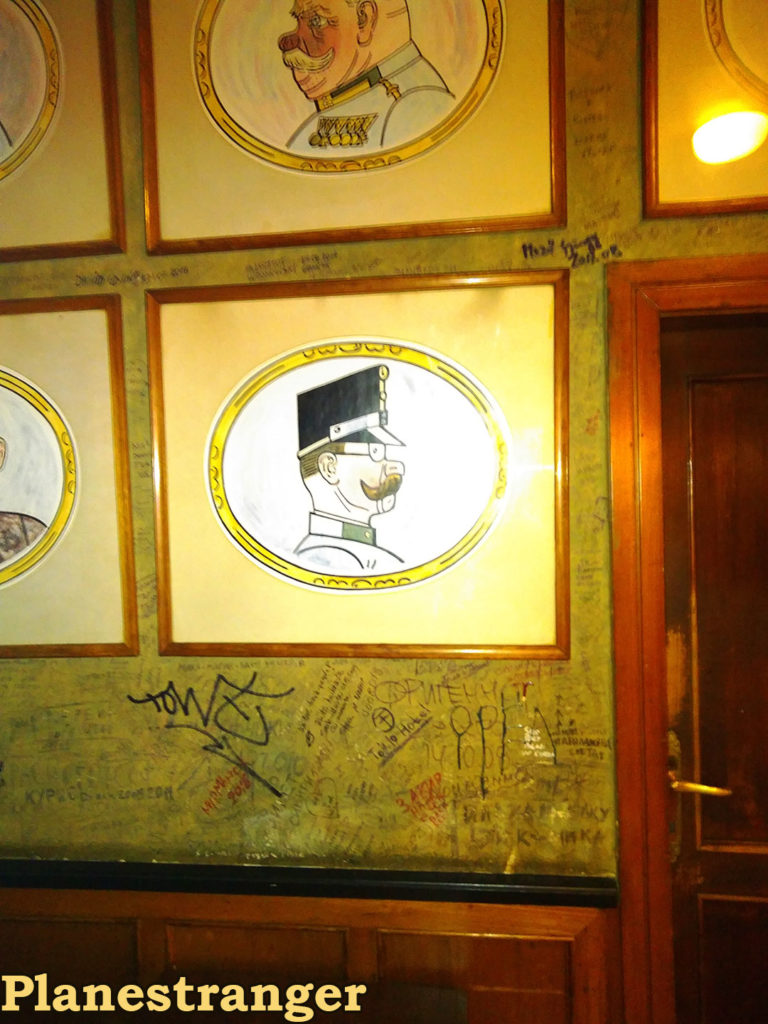 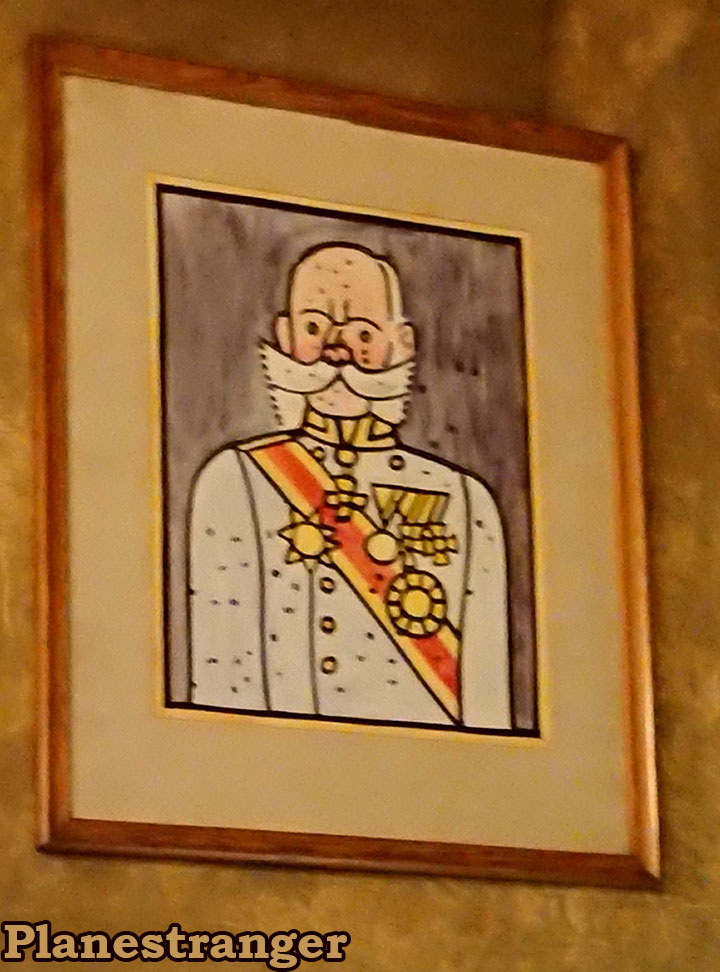 Portrait of emperor Franz Joseph I that was unmercifully shat on by flies. 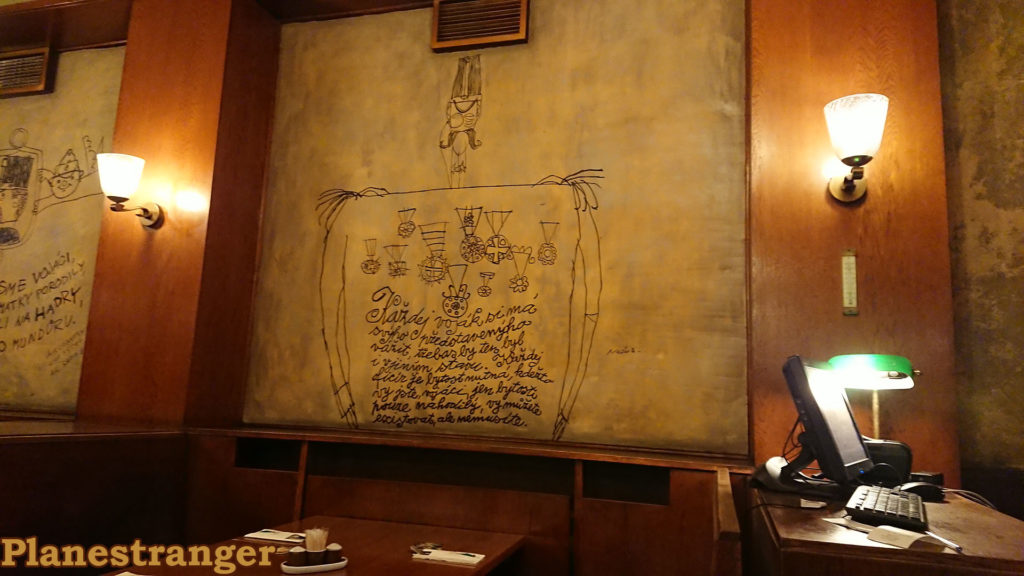 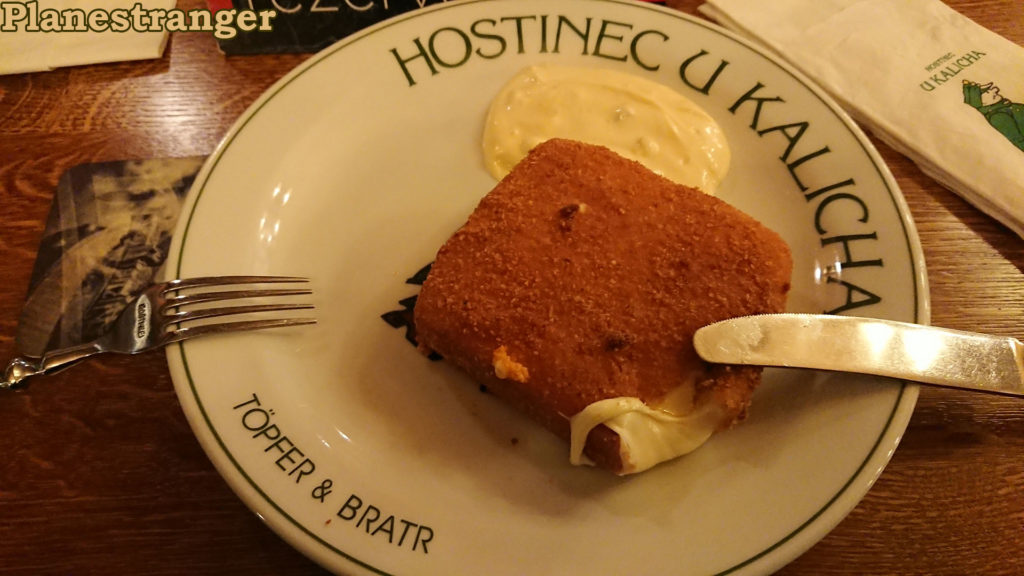 Hostinec u Kalicha presents itself as the exact place that was called The Chalice in the book “The Good Soldier Švejk” where Josef Švejk and first-class private Vodička agreed to meet at six o’clock after the world war. Dim light, wooden old-looking furniture, walls painted with caricatures, green lamps, full-sized dummies that depict characters from the book, headdress of Austrian soldier on the visible place and waiters in old-fashioned clothes altogether create there atmosphere of Great War times. Menu consists of Czech national cuisine mostly, though I was able to find grilled cheese to suit my pescetarian taste. If you know and love the main literary work of Jaroslav Hašek, it might be interesting for you to come there, have a drink or eat something.

Continue to My Spring Prague part 2 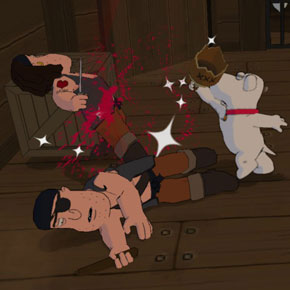 Family Guy: Back to the Multiverse - PC